Gary Becker just came back from China. And he shares his thoughts on the country's long-term growth prospect. Like many others, Becker sounds a little worried about the enlarging state-sector in Chinese economy.

Mr. Becker, the 1992 Nobel economics laureate, is professor of economics at the University of Chicago and senior fellow at the Hoover Institution.

I just spent two weeks lecturing in China and Hong Kong, and discussing China's economic development with many economists, businessmen and government officials. China's progress since my first trip there in 1981 has been truly remarkable, and I expect considerable growth during the next decade. Nevertheless, China still faces many challenges if it is to move beyond middle-level income status into the exclusive club of high per capita income countries.

No country in the modern world has managed persistent economic growth without considerable reliance on private enterprise and decentralized private markets. All centrally planned economies failed to achieve sustained development, including the Soviet Union before its collapse, China before market reforms began in the late 1970s, and Cuba since Castro's revolution in the late 1950s.

China's private sector has led its dominance in textiles, electronics, and other consumer and producer goods. It's followed the model of the "Asian Tigers"—Hong Kong, Singapore, South Korea and Taiwan—and relied heavily on exports produced with cheap labor. In the process, China has accumulated enormous reserves, as Taiwan, Japan and other rapidly growing Asian economies did in past decades.

Poorer countries like China need not get everything "right" to grow rapidly through exports to richer countries. They need only have some strong sectors that use world markets to fuel overall growth. Japan's rapid growth from the 1960s-1980s was led by a highly efficient manufacturing sector. Yet at the same time Japan also had a large and inefficient service sector, and an agricultural sector that was riddled with subsidies and inefficient incentives.

Similarly, China's economy still has a glut of state-owned enterprises (SOEs) with excessive employment and low productivity. Their importance has fallen over time, but Chinese economists estimate that they still control about half of non-agricultural GDP (*SOE's share in manufacturing sector is much lower – my own note). One crucial example is the state-controlled financial sector that makes cheap loans to other large, inefficient and unprofitable state enterprises. China's economy also suffers from extensive price controls, restrictions on migration, and many other structural barriers to efficient growth. 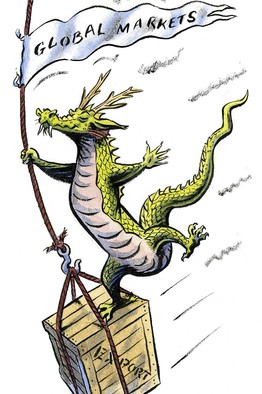 Some democracies, like postwar Japan, have made the economic reforms needed for sustained economic progress. India, for example, experienced rapid growth after it began in 1991 to shed a socialist orientation and encourage private investment and private initiative. But economic progress has been swift under autocratic rule as well, including in Chile under Augusto Pinochet, Singapore under Lee Kuan Yew, and Taiwan under Chang Kai-shek. Usually, however, personal freedom has grown along with rapid economic progress in autocratic governments. Chile, Taiwan and South Korea, for example, all became vibrant democracies after they'd grown rapidly for a number of years.

Something related has happened in China. The degree of personal freedom in China today is enormously greater than in 1981, when the vast majority of the population had essentially no personal freedoms. The Internet, in particular, has given hundreds of millions of Chinese access to all kinds of information, including what happens in democracies, and various criticisms of their government's policies. The government actively tries to censor the Internet, but these censors are easily bypassed. Students and others say they readily "climb the wall" by using cheap software (appropriately, made in America) that gives them direct access to the Internet in Hong Kong and hence avoids the censors.

I do not know how soon China will evolve into a political system with competing parties, or whether China will continue to have effective leadership under its single-party structure. But as the economy continues to develop it will be impossible to prevent personal freedoms from expanding, including the freedom to criticize economic and social policies.

Global markets allow poor countries to grow rapidly for a while, but it is far more difficult to grow beyond middle-income levels. Much has been made of the fact that a month ago China's aggregate GDP surpassed that of Japan. But all that means is China's per capita income is about 10% of Japan's, since China's population is about 10 times that of Japan. Despite its great economic advances, China still has a long way to go to become a rich country.

Developing countries improve their technological base by importing technologies and knowledge developed in advanced countries. China has encouraged direct foreign investment in part to get access to the technologies of Japan, the U.S., Germany and other nations. Using technologies developed by others is still important after countries advance to middle-income levels, but these countries must then also develop more of their own technologies to advance much further.

To accomplish this transition, China has been promoting university enrollments and a growing R&D sector. University attendance in China has grown greatly since the late 1990s, propelled by rapid increases in the earnings of individuals with higher education. China is innovating more, but it is still a long way behind the U.S., Japan and other rich countries.

As for China's currency, it's true that the yuan is considerably undervalued due to Beijing's continued intervention in foreign-exchange markets. But the undervalued yuan is a gift to American and other consumers outside China because it makes goods produced in China much cheaper.

In effect, China sells goods cheaply to the rest of the world and receives in return U.S. and other paper assets that pay almost no interest, and will depreciate in value when inflation rates increase in the U.S. These are the main reasons why China should move toward floating the yuan.

Many Chinese officials believe that substantial yuan appreciation will make the SOEs even less competitive, thereby increasing unemployment and social unrest as these enterprises contract. Yet an undervalued currency not only leads to a further accumulation of paper assets but also weakens the incentives of Chinese companies to cater to domestic consumption—which is remarkably weak—and to upgrade their exports to higher quality products.

There is tremendous pride and enthusiasm among Chinese regarding their economic achievements, and a growing confidence that China is returning to its great-country status of centuries ago. This is reflected in the enormous energy of its professionals, entrepreneurs and workers...

← What leads to success? Currency appreciation will not cure trade deficit →