First watch this interesting debate between dollar bull and bear.

Now I will explain why I think dollar will be going down.

First I show you a graph between market volatility index (VIX) and the Dollar, in recent 3 years. The dollar shown in the graph is the dollar index, weighted by the US trade share with its major trading partners. 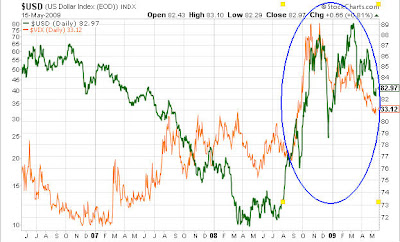 It’s easy to see that before August/September ’08, the two lines did not move together, and actually they often moved in the opposite direction. But right after Lehman’s fall (as circled in blue), market volatility spiked up, going all the way to above 80, and the dollar rose along with it. The reason is that risk-averse investors moved their assets and investments from overseas back to the country. With huge capital flowing back in, the dollar had a huge appreciation. Dollar benefited from risk-aversion and served a safe-haven during the time of panic.

Recently, with equity market up almost 40% and a lot of talk about “green shoots”, market confidence came back, and the volatility came down. The Dollar just broke below its 200-day moving average (see below graph for a closer relationship between the two in recent months).

My sense is that the Dollar will continue to go down. What you might see is a diverging performance: dollar going down against the commodities currencies, such as Aussie and Canadian Dollar; but going up against Euro, where the economy is weaker and the European Central Bank lags behind in economic stimulation. 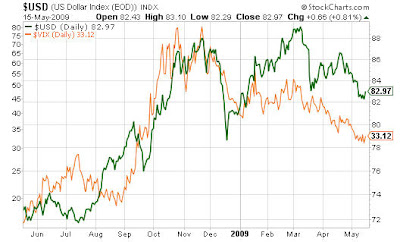 In the long term, the single most important factor in determining the Dollar’s direction is the Fed’s monetary policy and US business cycle. This idea came originally from Robert Mundell, the Nobel laureate and the “father of the Euro”. 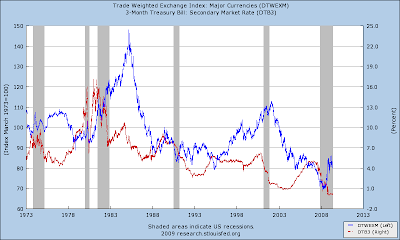 The history goes back to 1973, where the data is last available. As you can see, the two lines roughly move in tandem with each other, with interest rate leading for the dollar for a few quarters (or even longer).

Of course, the real life is much more complicated, so is the Dollar. There are a few notable exceptions: one was after the 1973 recession, then there was 1982 recession, and lastly the most recent recession.

In the 1973 and 1982 recessions, dollar went up even when the interest went down. This was probably because the relative interest rate between the US and other developed countries was still quite large.

While the recent divergence was obviously the panic trade: the Dollar serving as safe-haven. And this is also the main reason why I predict the US dollar will go down once the economy starts to recover.

← Gary Stern says recession near its end Racing to become the next Dr. Doom →