Normally, rising yield curve signals economic recovery is well ahead. But the recent surge reflects probably much more of the market’s concern over government budget deficits and its ability to finance it. Either the government reins in spending, or the market will demand a higher interest rate as reflected in the rising yields of long-term government bonds.

Of course, government can always print money. So the alternative way of interpreting the current surge in the yield curve could be that the market is very nervous about higher inflation in the future so investors will demand the same real return on government bonds (nominal interest rate minus inflation). 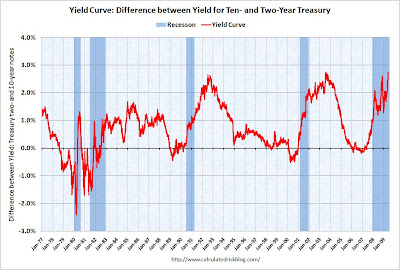