What we will be witnessing may well be another jobless recovery, just like after 1991 and 2001 recessions.

With working hours of full-time workers being cut (see chart 1 below), and a lot of people on part-time-job roll (chart 2), when true economic recovery comes, employers will first increase working hours of existing full-time workers, then transfer people from part-time roll back into full-time. This means any new hiring will come very late and slow…maybe years after official recession ends. Measure of broader unemployment rate, including drop of part-time workers from full-time labor force, in fact now already reached over 16% (chart 3). 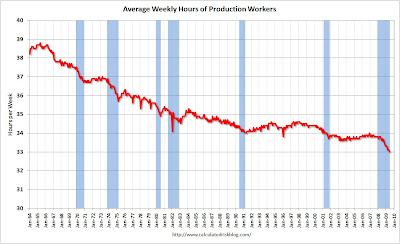 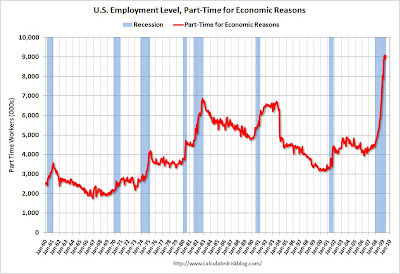 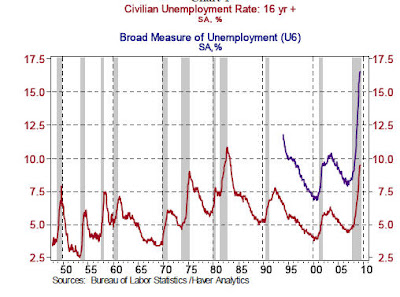 Here below is an analytic piece from WSJ yesterday on the same topic:

June’s payrolls numbers contradict the “green-shoots” thesis. Worse, the data suggest that when they do appear, they won’t exactly shoot up.

Since the U.S. officially entered recession in December 2007, 6.9 million jobs have been lost, on a seasonally adjusted basis. More bad news lies beneath Thursday’s headline numbers. The average workweek fell to 33 hours, the lowest ever on record and 0.8 hours less than before the recession began.

If Americans still were clocking those extra 48 minutes a week now, then the same aggregate amount of work could get done with 3.3 million fewer employees. The implication is that, were it not for shorter workweeks, the unemployment rate would be 11.7%, not the official 9.5%.

Stealth underemployment also is evident in the rise in the number of workers taking part-time jobs due to the slack economy. Their ranks have doubled in this recession, to about nine million, or 5.8% of the work force.

The likelihood is that when economic activity picks up, employers will choose to increase hours on existing workers and bring back part-time workers to full-time status before making new hires.

That sets up a recovery that could rival the previous upswing in terms of joblessness. The difference between any coming upturn and the one that ended in December 2007 is that struggling workers will have less credit available to maintain spending habits. Paradoxically, labor’s woes likely will enable many firms to beat near-term earnings expectations, as wage costs dwindle or stagnate. But the unavoidable conclusion is that the consumer-spending power needed to fuel a sharp rebound in the economy just isn’t there.