Blinder: The economy has hit bottom

There are a few egg-heads Fed commentators worth listening to, Alan Blinder is one of them.  In this piece, Alan Blinder explains how mechanically the economy could see a positive GDP growth in coming quarters, and why hitting the recession bottom can be good news and bad news.

How’s the economy, you ask? I have the proverbial good news and bad news, but in this case, they’re exactly the same: The U.S. economy appears to be hitting bottom.

First, the good news. Right now, it looks like second-quarter GDP growth will come in only slightly negative, and third-quarter growth will finally turn positive. Compared to the catastrophic decline we recently experienced—with GDP dropping at roughly a 6% annual rate in the fourth quarter of last year and the first quarter of this year—that would be a gigantic improvement.

Furthermore, there is a reasonable chance—not a certainty, mind you, but a reasonable chance—that the second half of 2009 will surprise us on the upside. (Can anyone remember what an upside surprise feels like?) Three-percent growth is eminently doable. Four percent is even possible. Surprised? How, with all our economic travails, could we possibly mount such a boom? The answer is that this seemingly high growth scenario isn’t a boom at all. Rather, it follows directly from the arithmetic of hitting bottom.

Bear with me for two paragraphs while I do some numbers. In recent quarters, several critical components of GDP have declined at truly astounding annual rates—like minus 30% and minus 40%. You know the culprits: housing, automobiles and business investment. (Also inventories, about which more later.) Eventually, those huge negative numbers must turn into (at least) zeroes. Notice that the move to zero doesn’t constitute a boom, not even a dead cat bounce, but merely the cessation of catastrophic decline. In fact, hitting zero growth and staying there would be a disaster scenario. We’ll almost certainly do better. 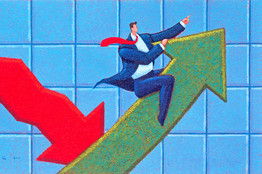 But watch what happens when—and remember, it’s when not if—the arithmetic of bottoming out takes hold. Housing, which is down to 2.6% of GDP, will serve as an example. In the first quarter, spending on new homes declined at a stunning 39% annual rate. If that minus 39% number turned into a zero in a single quarter, that change alone would add a full percentage point to that quarter’s GDP growth (because 2.6% of 39% is about 1%). If the move to zero were to happen over two quarters, it would add about a half point to each. Many people think housing may in fact bottom out in the third or fourth quarter. Autos may already have passed their low point. And business investment will follow suit.

Now back to inventories. Recent quarters have seen an almost unprecedented liquidation of inventory stocks, which means that American businesses were producing even less than the paltry amounts they were selling. That, too, must come to an end. As inventory change turns from a large negative number into just zero, GDP will get another a big boost.

Now the key point: None of these events are probabilities; they are all certainties. The only issue is timing, about which we can only guess. But if several of these GDP components happen to bottom out at roughly the same time, we could be in for a big quarter or two.

Remember the fiscal stimulus that everyone seems to be complaining about? One of the critics’ complaints is that little of the stimulus money has been spent to date. OK. But that means that most of the spending is in our future.

And remember all those interest-rate cuts the Federal Reserve engineered in 2008, in a futile effort to stem the slide? The Fed’s efforts were futile largely because widening risk and liquidity spreads negated any impacts on the interest rates real people and real businesses pay to borrow. Now those spreads are narrowing, which allows the Fed’s rate cuts to start showing through to consumer loan rates, business loan rates, corporate bond rates, and the like. In short, monetary stimulus is in the pipeline—a pipeline that was formerly blocked.

So why, then, is everyone feeling so blue? That brings me to the bad news: The U.S. economy is hitting bottom.

If things feel terrible to you, you’re not hallucinating. Economic conditions are dreadful at the bottom of a deep recession. Jobs are scarce. Layoffs abound. Businesses scramble for penurious customers. Companies go bankrupt. Banks suffer loan losses. Tax receipts plunge, ballooning government budget deficits. All this and more is happening right now, in what looks to be this country’s worst recession since 1938. At such a deep bottom, few people have reason to smile. (Bankruptcy lawyers maybe?)

What’s more, GDP is not terribly meaningful to most people. Jobs are—but they will take longer, maybe much longer, to revive. The last two recessions, while shallow, illustrated painfully that job growth may not resume for months after GDP bottoms out. And the unemployment rate won’t fall until job growth rises “above trend” (say, 130,000 net new jobs per month). That’s a long way from where we are today. So, even though the economy may be making a GDP bottom about now, the unemployment rate will probably keep rising for months—which is bad news for most Americans.

One last, obvious, but unhappy, point: The bottom of a deep recession leaves the nation in a deep hole. Our economy now has massive unemployment and vast swaths of unused industrial capacity. It will take years of strong growth to return to full employment.

After the last big recession bottomed out at the end of 1982, the U.S. economy rebounded sharply, with a remarkable six-quarter spurt in which annual GDP growth averaged 7.7%. That spurt induced President Ronald Reagan, running for reelection in 1984, to declare “It’s morning again in America.” Nobody thinks we can repeat that today, hampered as we are by a damaged financial system, decimated household wealth, rising foreclosures, and traumatized consumers who have suddenly learned the virtues of thrift.

So, yes, the good news is also the bad news. The economy is hitting bottom, but it’s a long, uphill climb to get out.