Unemployment rate is a lagging economic indicator and it peaks long after recession ends. So how can a lagging indicator affect the burgeoning recovery? You may ask.

This short piece from WSJ takes on this traditional view that unemployment does not matter, and analyzes why in this recession unemployment will become the decisive factor to the path of the US recovery.

Threat of Unemployment
Are markets taking too rosy a view of unemployment? Unemployment is usually seen as a lagging rather than leading economic indicator: In the last two U.S. downturns, firms continued shedding jobs for months after the recession was officially over. Typically, companies only start hiring in earnest once a recovery is clearly under way. But this time, unemployment may play a bigger role in determining the timing and shape of recovery.

True, the markets are currently betting the old orthodoxy still holds sway. Unemployment has climbed quickly. The U.S. rate hit 9.5% in June, higher than any point since 1983, and up from 5.6% a year earlier, one of the steepest annual rises on record. In the euro zone, May’s 9.5% unemployment rate was the highest in 10 years. The Organization for Economic Cooperation and Development forecasts rates of 10% in the U.S. and more than 12% in the euro zone in 2010. But that has not stopped equity markets from rallying strongly, amid growing hopes of a recovery this year.

That’s partly because job losses and other cost cuts have provided a cushion for corporate profits: 82% of the S&P 500 companies to report so far have beaten second-quarter earnings expectations. The snag is that only 50% have beaten sales targets, as Deutsche Bank points out. For the moment, earnings are only being held up by costs shrinking faster than revenue. For a true recovery, sales need to start growing too. Rising unemployment may make that harder to achieve.

First, the flipside of improved corporate profits is real financial and consumer pain. U.S. credit card bad debt, for example, is rising faster than unemployment. Annualized write-offs of securitized credit card debt hit a record 10.8% in June, according to Moody’s. The agency expects that to rise to 12% to 13% in mid-2010. In Europe, Fitch’s U.K. credit card charge-off index hit a record high of 9% in April. Historically, investors have assumed that a one percentage point increase in unemployment will lead to a one percentage point increase in bad credit card debt. But the pace of job losses and levels of debt means nobody is confident previous correlations will hold. Similarly, rising unemployment could also hit house prices again, causing further turmoil for mortgage-backed securities.

Financial Times also has a nice video analysis on that the current earnings growth was driven by aggressive cost cutting, rather than sales. Consumer demand still remains every weak. 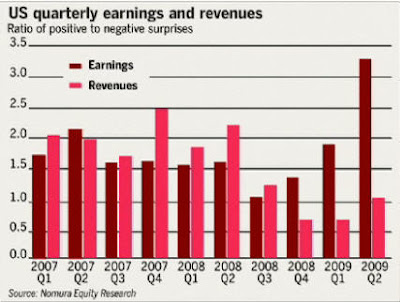 (click on the graph to play video; source: FT)