Shades of gray in employment

By Paul Deng in Uncategorized on September 7, 2009.

The unemployment rate is near 10%. Every age group is seeing decline of employment except for the age group that is above 55. What happened?  This WSJ piece explains — It's not merely demographic change.

The Who famously sang they hoped they'd die before they got old. Clearly, they didn't want a proper job.

So far in this recession, 6.6 million jobs have been lost on a seasonally adjusted basis. That wipes out six of 10 jobs created in the last, unusually jobless, economic upswing. Every age group has lost jobs.

Except, that is, the cohort aged 55 and over, which has gained nearly one million positions. What's more, over-55s accounted for two-thirds of net jobs created in the upswing.

This has less to do with gray flair and more with a statistical wrinkle. The first of the postwar baby boomers hit official retirement age in 2011. That demographic bulge has been rolling through the age structure — in and out of the workplace — through this decade. According to Census Bureau estimates, the overall population age 55 to 64 grew by 9.4 million between July 2001 and July 2008. That isn't dissimilar to the roughly eight million increase in the ranks of employed over-55s between November 2001 and now.

But the figures point to more than just a demographic change. Over the same time period, the proportion of over-55s in employment rose five percentage points, possibly reflecting a need to re-enter the job market after the bursting of a tech bubble and a housing bubble damaged their net worth.

Meanwhile, labor participation fell for every other age group. For those age 16 to 24, for example, the rate fell almost 10 percentage points, to under half, even as that population group expanded. A graying work force focusing on rebuilding its nest egg while the young struggle for entry doesn't bode well for an economy dependent on sprightly consumers.

David Rosenberg also has a wonderful graph on this: 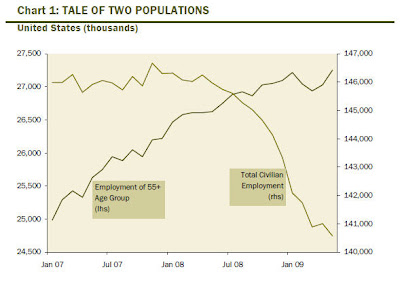 ← Why individual investors sit tight on their 401(k)s? China is trying very hard to diversify away from US dollar →