While gold is grabbing the headlines, its sister precious metals are actually reaping the most gains. For the year to date, platinum and palladium, two lesser-known metals, have surged 38% and 56%, respectively, far eclipsing gold's 12% gain. Silver is up 42% over the same period.

With their dual roles as precious and industrial metals, platinum and palladium are managing to profit from both sides of the debate over whether an economic recovery is on the horizon.

Platinum and palladium have a multitude of uses, with the auto industry taking about 60% of each metal's annual production for catalysts to reduce tailpipe emissions. Some bulls view the metals as a bet on economic recovery, and on the struggling automobile sector in particular.

Meanwhile, for those concerned about the fragility of economic conditions and the Federal Reserve's printing of money, some see the metals as a store of value like gold.

However, despite "cash for clunkers" programs around the world boosting vehicle sales, analysts still think auto makers' demand for both metals will decrease this year. Even with output likely to decline because vital South African mines are plagued with power shortages and labor disputes, both the platinum and palladium markets still confront the threat of a surplus. 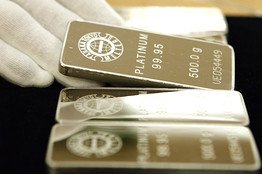 One factor supporting prices is the growing appetite from exchange-traded funds that are backed by platinum and palladium. As investors speculate on commodities, the total amount of the metals held by six such funds — traded in the U.K., Switzerland and Australia — hit records last week, with about $1 billion in assets, according to Barclays Capital.

Of late, China may also have helped prop up the metals, with imports of platinum and palladium up 92% and 63%, respectively, in August from a year earlier, fueled by stronger demand from jewelers and auto makers.

Last year, Chinese jewelers and auto makers accounted for 16% of platinum's global consumption, according to metal refiner Johnson Matthey. China's jewelry demand for platinum is this year projected to exceed peak purchases seen in 2002, meaning a jump of 43% from last year, according to John Reade, a UBS metals strategist. However, real demand growth isn't strong enough to support such explosive imports, suggesting stockpiling.

With car makers in Detroit and elsewhere still facing weak sales, the rally in platinum and palladium seems to have gotten ahead of itself. Without the support of a sustainable rebound in industrial demand, prices could wane once stockpiling slows down. Any loss of faith in the strength of the expected global recovery would likely hurt the two metals a lot more than gold.