What you need to know when you buy inflation-hedge investments (source: WSJ):

The threat of inflation is drifting through the collective consciousness of investors these days. But will the inflation-protection investments so many are turning to work as advertised? 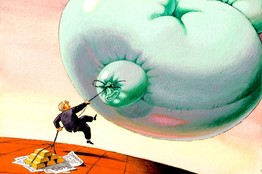 Though the widely watched consumer-price index was down 1.5% in the 12 months through August, in blogs, newsletters, online chat rooms and elsewhere, institutional investors, economists and others are wringing their hands. They're warning that the vats of stimulus money and credit that governments are pouring into economies world-wide will, at some point, result in rising prices for goods and services. Warren Buffett, the heralded investment oracle running Berkshire Hathaway Inc., wrote in an August editorial in the New York Times that the unchecked dumping of dollars into the U.S. economy "will certainly cause the purchasing power of the currency to melt." That means inflation.

Worried investors have been looking for insurance in the form of assets such as mutual funds and exchange-traded funds focused on gold, commodities and Treasury inflation-protected securities, or TIPS. In the past year, interest in TIPS funds in particular has been running at record levels, with some weeks recording more than $400 million in sales.

But many of these investments have never been tested during a bout of meaningful inflation. The last time inflation ramped up significantly was three decades ago. Yet TIPS have been around only since the late 1990s, and commodity funds are of even more recent vintage, as are the gold funds that invest in bullion or track the metal's market price.

So investors are taking it on faith that these investments will perform as expected. "There's no guarantee with any of them," says Christian Hviid, director of asset allocation at Genworth Financial Asset Management.

Indeed, there are reasons to believe that some investors are likely to be disappointed. To understand the pros and cons and potential risks of popular inflation-protection strategies, consider how each works:

TIPS are designed to track changes in the monthly CPI, as reported by the Bureau of Labor Statistics. If the CPI rises, the securities' principal, or face value, increases. That increases interest income for the holder—because the interest is set as a percentage of the principal—helping investors keep pace with rising prices. Plus, when the securities mature, investors get back the CPI-adjusted principal.

For many investors, TIPS appear to be the purest form of inflation protection, since they are the only asset explicitly tied to an inflation benchmark.

But that raises a key question: Does the CPI accurately reflect inflation? "No," says Paul Brodsky, a partner at QB Asset Management. "The CPI is deeply flawed. It is not an accurate indication of how much purchasing power a dollar loses."

The index, for instance, doesn't reflect borrowing costs. When the Federal Reserve raises interest rates, rates on credit-card balances and other adjustable-rate loans rise, and consumers must spend more to pay off their debt or support a lifestyle funded with credit cards. And there are other quirks: When airlines lower prices, that is captured by the CPI, yet when they impose a $25 surcharge for luggage, that is not. Your own mix of expenses could also be very different from the one the benchmark uses.

So, in terms of both the interest payments and the principal returned, TIPS could disappoint investors expecting these securities to help them preserve their purchasing power.

Moreover, the market value of TIPS won't necessarily perform as expected. That could lead to losses for investors who own TIPS directly and sell them before maturity, or for investors in TIPS funds.

Amid nascent inflation, TIPS prices would likely perform better than those of regular Treasurys, as investors rush to own inflation protection. Once the Fed responds by raising interest rates, however, TIPS already in the market would begin to lose some luster, just like regular Treasurys. After all, if a new TIPS offers a yield of, say, 5%, investors would have little interest in older securities yielding 3%. The market price of those older TIPS would fall, which could result in losses for investors who own them and decide to sell.

Of greater concern is what happens to TIPS if the market or the Fed is particularly aggressive in pushing up interest rates.

That's a scenario reminiscent of the late 1970s and early 1980s, when the Fed quickly shoved interest rates as high as 20% at a time when inflation as measured by the CPI was running in the low teens. A similarly aggressive move wouldn't be good for Treasurys in general, but it would be particularly bad for TIPS, say bond-market pros, because it would mute inflation expectations, leaving investors less willing to pay for the inflation protection offered by TIPS.

Though long heralded as a hedge against inflation, gold hasn't always gone along for the ride when U.S. consumer prices are rising. Consider data from Morningstar Inc.'s Ibbotson Associates research and consulting unit: The correlation of spot gold prices to an Ibbotson-tracked inflation benchmark is just 0.096. (Correlation is perfect at 1; the closer to 0, the less the correlation.)

Certainly, gold has done well in some inflationary periods, like the late 1970s, when the metal spiked above $800 an ounce. Still, investors would do better to view gold as an international currency that hedges against weakening paper currencies, particularly the dollar. For instance, the U.S. dollar index, tracking the greenback's performance against a basket of currencies, has slipped more than 13% since March, when the index hit its peak so far for this year. Gold prices, meanwhile, are up more about 14% so far this year.

The current rally in gold prices is driven in part by growing worries about a weakening dollar tied to the expanding U.S. budget deficit and the outsize obligations the U.S. has in its Social Security and Medicare systems. But that sentiment could reverse, particularly if investors perceive that political leaders and economic policy makers have a grasp on the problem. In that situation, the dollar could strengthen and push down the price of gold, even if inflation is heating up.

Moreover, many economists expect the Fed to react slowly to rising prices, to ensure the economy doesn't tip over again, and then play catch-up by aggressively pushing interest rates higher. Depending on what central bankers are doing globally, rising rates in the U.S. typically make the dollar more attractive to overseas investors and currency traders. In that scenario, buying pushes up the dollar and "gold will get knocked down," says Chuck Butler, president of online financial-services firm EverBank World Markets.

And because bullion generates no income, gold also would become less attractive as interest rates rise.

But there's another issue: What does your gold fund own?

Others don't own physical gold and instead seek gold exposure through derivatives. PowerShares DB Gold, for instance, tracks an index of gold-futures contracts. The risk there is that the fund faces possible counterparty woes. In a major market dislocation, not unlike the credit crisis, if investors on the opposite side of a trade fail to make good on their obligations, "there is risk that the expected price change in some commodity-proxy funds won't be delivered," says QB Partners' Mr. Brodsky.

Investors also frequently choose funds that own shares of gold-mining companies for inflation protection. Shares of the gold miners do generally rise alongside gold prices; in the past year, the Dow Jones U.S. Gold Mining Total Stock Market Index is up 26%. But, besides the fact that gold prices don't always track inflation, there's another reason for investors to beware of these funds. Though gold miners own vast sums of gold in the ground, their share prices are affected by events ranging from governmental actions to earnings forecasts to various corporate troubles, meaning the companies could underperform even as gold prices rise.

Commodities include food staples such as wheat, corn, sugar and soybeans; industrial metals such as nickel and copper; and energy resources such as coal, oil and gas. These products account for about 40% of the CPI, so they track the movement of the index well.

Investors can speculate on commodities using futures contracts, but that can be a challenge for individual investors. Commodity-focused mutual funds and exchange-traded products have sprung up in recent years, and for the most part they've done a good job of reflecting the ups and downs in the commodity markets.

However, investors need to be careful about exactly what they're buying. "The word 'commodity' in a fund's name should not be the end of your research," says Scott Burns, director of ETF analysis at research firm Morningstar.

One potential problem: Unlike a gold fund that can easily own and store bars of metal in a vault, commodity funds can't easily own commodities—agricultural commodities are perishable, and industrial commodities would consume far too much space. Instead, the funds use derivative investments such as futures contracts, which the funds roll over from month to month—continually selling contracts as they near expiration and buying new ones.

While commodity funds generally make money when commodity prices are rising, in certain situations that isn't the case because of a phenomenon known as contango. That's when futures prices are higher than the spot price for a commodity. In that situation, a fund ends up selling expiring contracts at a lower price and then reinvesting the money in higher-priced contracts—only to watch prices of the new contracts slide in value as the next expiration approaches.

"Effectively, the fund is always selling low and buying high," says Bradley Kay, an ETF analyst at Morningstar. So even though the underlying commodity is rising in price, "the fund could be losing money every time the contract rolls over."

Many commodity-based securities are exchange-traded notes, or ETNs, which pose a different risk. Unlike ETFs, which generally own a pool of hard assets or securities, ETNs own nothing. They are promissory notes issued by a bank, meaning they're unsecured debt; the return you earn is calculated based on the movement of an underlying commodity index.

"You're loaning money to a bank, and the bank pays you the return of the underlying index," Morningstar's Mr. Burns says. So long as the bank is healthy, no worries. But if it fails, you're in the pool of creditors hoping to recoup your money. Lehman Brothers, Mr. Burns notes, "had a few ETNs when it went under," two of which tracked commodities. Those ETNs were delisted and their holders became Lehman creditors.