Home » Uncategorized » Graduating is not fun in 2009

This week is the graduation week all cross the country. Graduating in 2009 is not fun: with unemployment rate rising to 8.9% and surely going to get worse in coming quarters, the job is harder to find than ever. Even you find a job, your wage/salary is likely to be much lower than in good times. And according to the research by Yale economist Lisa Kahn, this initial gap in salary tends to persist over many years to come.

Worse yet, the gap does not dissapear and it tends to perist for a long period of time. As shown in the graph, even after 15 years, the gap is still at 10% for people hired when unemployment rate is at historically high level. Call it “the curse of class of 2009“. 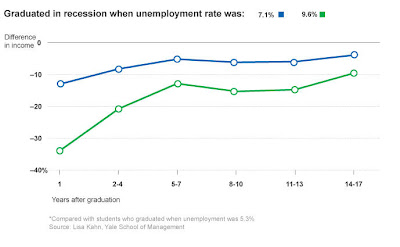 Now with some positive note from Andy Rooney at 60 mins, “graduations are not what’s wrong with the world”: