Just like in Asian financial crisis, Chinese officials may have to massage their data again to make the growth figure look better, so that there would be no challenge to their ruling power.

In 2009, China watchers may double check GDP number with industrial production, and electricity usage, to find the potential discrepancies.

China's economy is slowing. By just how much is a bit of a guess.

The uncertainties around Chinese economic data-gathering make it hard to tell. Yet with China likely to be one of the few major economies to show growth next year, the question is pretty crucial. Already there are concerns Beijing could massage its GDP data next year.

Keeping the annual growth rate above 8% has for long been the sine qua non of Chinese economic policy. That rate was 9% in the third quarter, and all the economic news since then points to a lower rate in the past three months of this year.

Any dip below 8%, however temporary, would be a blow to the government's standing. Having announced a $586 billion fiscal-stimulus package this autumn, the government needs to show that it has worked by next year.

For economists, the key frustration in China's GDP figures is the lack of a quarterly expenditure breakdown to balance the output figures that the statistics bureau provides. Mark Williams, of consultancy Capital Economics, says proxies for consumption, investment and net trade actually suggest the Chinese economy grew more quickly in the third quarter than 9%.

So what can China-watchers turn to as a check on official GDP data, and a means to divine the future?

Stephen Green, Standard Chartered's head of research, tracks a mixture of industrial goods production, freight activity, bank-credit growth and commodities imports to derive a measure of real activity in China. That is currently showing "very weak" growth momentum going into the first part of 2009. China's own industry minister has said industrial output needs to expand by 12% next year if the economy is to retain its 8% expansion rate. In November, industrial production grew by just 5.4% on an annual basis. 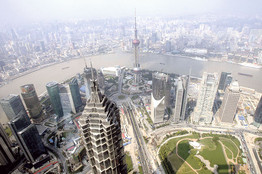 Still, the totemic 8% growth mark will be at risk early next year. Exports, which have contributed about 20% to GDP over the last couple of years, fell year-on-year for the first time since 2001 in November, and an imminent recovery in China's main markets looks unlikely. The property sector is still in a slump, and domestic consumer spending isn't making up for the slowing of both these areas.

Set against this is the $586 billion stimulus package spread over 2009 and 2010, but its effects mightn't be felt until the second half of 2009 at the earliest. By that time, the speed and magnitude of the slowdown should already have made annual growth of 8% impossible to achieve.

The first and second quarters of 2009 will provide a stern test of China's 8% growth commitment, then — and the probity with which those figures are produced.

← Jim Rogers Get ready: for a lost decade →