After today’s 100bps cut by Bank of England, UK’s base bank rate reached its lowest level since 1939. The rate is expected to be lowered again, which will be the lowest level since BOE was founded in 1694. UK’s economy is in dire situation. 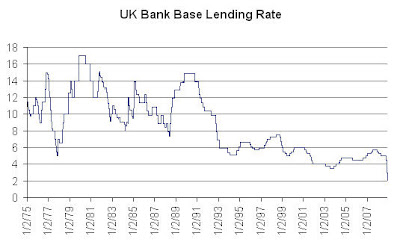 Harvard University's endowment suffered investment losses of at least 22% in the first four months of the school's fiscal year, the latest evidence of the financial woes facing higher education.

The Harvard endowment, the biggest of any university, stood at $36.9 billion as of June 30, meaning the loss amounts to about $8 billion. That's more than the entire endowments of all but six colleges, according to the latest official tally.

Harvard said the actual loss could be even higher, once it factors in declines in hard-to-value assets such as real estate and private equity — investments that have become increasingly popular among colleges. The university is planning for a 30% decline for the fiscal year ending in June 2009.

Other university endowments also are suffering, and many states are cutting public funding of higher education. Colleges are instituting hiring freezes, planning enrollment cuts and discussing steep tuition increases, intensifying worries about the impact of the recession and financial crisis on college access.

The federal government already has taken emergency steps to boost lending to students, and several well-off colleges have said they will maintain or boost financial aid to help families hurt by job losses, investments setbacks and borrowing problems. But not all colleges have the financial heft to withstand the many forces bearing down on them.

Joni Finney, a professor at the University of Pennsylvania who studies college economics, says she worries that public universities and less-wealthy, smaller private colleges may not be able to keep their doors open to all students. "If you go down the food chain of higher education, it's harder and harder to deal with these kinds of cuts," she says.

Private-college budgets are sensitive to investment declines because they typically tap their endowments each year to help cover operating expenses.

In a letter to Harvard's deans, university President Drew Gilpin Faust and another official blamed "severe turmoil in the world's financial markets" for the endowment loss. She said it would lead to budget cuts, and that the school would sell bonds to increase its financial flexibility.

The Harvard letter said the 22% loss, from July 1 through Oct. 31, understates the actual decline because it doesn't reflect assets such as real estate whose values couldn't yet be estimated. Currently, endowment income funds 35% of Harvard's $3.5 billion budget.

Harvard's loss marks a sharp reversal from the endowment's formerly chart-topping performance. Harvard and Yale University — which hasn't disclosed its endowment's recent performance — pioneered an investment approach that de-emphasized U.S. stocks and bonds and placed large sums in more exotic and illiquid investments, including timberland, real estate and private-equity funds. That strategy, which was widely copied, helped the schools avoid significant losses after the technology boom ended in 2000.

But the current market has been far less favorable, partly because both Harvard and Yale have relatively small holdings of bonds, such as U.S. Treasurys, one of the few assets that have performed well. Harvard began its fiscal year with a target of having 33% invested in publicly traded shares, split among U.S. stocks, which have dropped 24% in the four months through October, and international stocks, which have fared worse.

Other investments, such as commodities, which were a boon to Harvard in past years, have turned negative in recent weeks. Harvard has sought to sell off about $1.5 billion in investments with private-equity firms, which typically use their assets to fund corporate takeovers, according to people familiar with the situation. That would be one of the largest sales ever of a private-equity stake. But its private-equity partnerships received bids of only around 50 cents on the dollar, say other people familiar with the matter.

Daniel Jick, chief executive officer at Boston-based HighVista Strategies, which handles money for some endowments, says that in some prior years, investments such as real estate and private equity have helped buffer endowments against losses on stocks.

In her letter, Harvard's Dr. Faust said the endowment loss has "major implications for our budgets and planning, especially since our other principal revenue streams also stand to be challenged by the economic crisis." Along with federal research funding, universities rely heavily on tuition and donations. Strained family finances could make it difficult for more families to afford tuition, while stock-market declines typically curb gifts.

To maintain its programs and commitments, the letter said, Harvard is expecting to spend a higher percentage of its endowment than it had recently. It said it was taking a "hard look at hiring, staffing levels and compensation," and was "reconsidering the scale and pace of planned capital projects."