Marty Feldstein on the economy

Marty Feldstein at Harvard economics, former head of NBER, talks about auto bailout, mortgage market, and how long this recession will be. (source: Bloomberg) 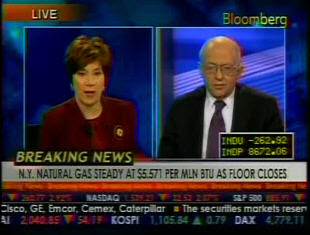 December 9, 2008 / 2 Comments on Commercialization of Microfinance

Commercialization of Microfinance: will it lift poor people out of poverty, or is it another sub-prime bubble in formation? (source: FT)

Bob Annibale's corner office, high up in one of London's few real skyscrapers, overlooks the Thames and the Millennium Dome from one window, Greenwich Park and the Royal Observatory from another. It is the kind of enviable perch you'd expect Citigroup's senior treasury risk manager to enjoy. But that is the job Annibale left three years ago; now he is Citi's "global director of microfinance".

Microfinance, the system of providing tiny loans and savings accounts to the poor, seems an unlikely and somewhat ironic candidate for Citigroup's attention. It was because banks weren't interested in serving the poor that the pioneers of microfinance saw a gap to be filled, back in the 1970s.

The most celebrated microfinance institution, the Grameen Bank, was born in Bangladesh in 1976 after Muhammad Yunus, a young economics professor, found that craftswomen were struggling to deal with the high costs of borrowing in order to buy raw materials. Village moneylenders charged up to 10 per cent interest per day. At such rates, a debt of a single cent would balloon to the size of the US economy in just over a year.

Yunus began lending – originally, less than a dollar each to a group of 42 families – and found that the poor were capable of investing the money, lifting themselves out of poverty and paying back the loans with near-perfect reliability. "All people are entrepreneurs," he proclaimed.

From small beginnings, a global microfinance movement has developed, with perhaps $25bn of loans outstanding and 125m to 150m customers. It has been blessed by the United Nations, which declared 2005 the International Year of Microcredit, and by the Nobel committee, which awarded the Nobel Peace Prize to Yunus and Grameen Bank in 2006.

Now multinational banks at last see microfinance as a profit opportunity. "Colleagues asked me if was giving up a business role," says Annibale, who became Citi's first microfinance chief in 2005. "I'd say, 'No, I'm taking up a new one'." He plans to make money for Citigroup by providing technology, advice and investment banking services to microfinance lenders. His division has so far been unaffected by this year's market turmoil.

The Citigroups of the world are not the only commercial players to get involved in what was once a purely philanthropic endeavour. Sequoia Capital, the venture capital fund that backed Google, Apple and Cisco, has taken an $11m stake in SKS Microfinance, a large Indian lender. Private equity groups such as Helios Capital are making similar moves. Pierre Omidyar, founder of eBay, gave $100m to Tufts University in 2005 with the stipulation that the donation be used to create a fund seeking its returns only through investments in microfinance. The fund's director, Tryfan Evans, recently predicted that it would be fully invested by the end of this year.

Most surprising and controversial are those microfinance institutions that have been transformed from charities to profitable companies through hugely successful initial public offerings. The most notorious, Mexico's Compartamos ("Let's Share"), used a $6m investment to turn itself into a billion-dollar company in less than a decade, expanding rapidly while charging very high rates to borrowers. What was once an idealistic movement is now a fast-growing industry – one that is rapidly losing its innocence.

The commercialisation of microfinance has sparked a fierce debate between profit advocates such as Carlos Danel and Carlos Labarthe, the founders of Compartamos, and traditionalists such as Yunus, who see microfinance lenders like Compartamos as indistinguishable from the moneylenders he set out to replace in 1976. Between these two poles lie the majority of microfinance practitioners, eager to gain access to capital and commercial expertise but concerned that competitive market forces may not help the poorest.

Commercialisation is a huge opportunity to lift people out of poverty. Despite the credit crisis, most of us take for granted the ability to save, to borrow for emergencies or to buy assets, to move money around and to insure ourselves. But several billion people lack these basic, life-improving services. The microfinance industry today serves fewer than one in 10 of them. Few people believe microfinance can grow quickly enough without adopting a more commercial model.

It is not just that commercialisation would provide plentiful access to foreign capital – although that is likely – but also that expertise from commercial players might allow microfinance lenders to move beyond simple loans. If lenders could take deposits, they should easily be able to fund their own loans: many poor people are would-be savers who lack a safe place to put their money. But as the credit crisis has made clear, deposit-taking is a difficult business requiring regulatory supervision even in rich countries. Commercial expertise is therefore indispensable for a deposit-taking bank.

Yet this is also a dangerous moment. Microfinance harnesses market forces to bring basic financial services to the poor, but many microfinance institutions do much more than that. Using donor funds or reinvested profits, coupled with their reach into remote villages, they provide subsidised education and healthcare. There is a risk that commercial logic could threaten these subsidised services by repelling donors or poaching the best customers. There is also the risk that competition misfires, leaving the poor paying higher rates rather than lower ones.

More than 500 years before the birth of modern microfinance, Franciscan monks in Perugia, Italy, developed their own method of social finance. They would lend money to the poor in times of crisis; as collateral, they would hold some precious item and charge a fee for its safekeeping to cover their operating costs. The idea was endorsed by the Pope and widely emulated. The monks called the fund a "Monte di Pieta", a Fund of Mercy. Today, we would call it a pawnshop.

This cautionary tale – told by Larry Reed of the Boulder Institute of Microfinance – resonates in a social movement that is sharply divided over commercialisation.