This wonderful chart below (courtesy of Doug Short) shows that not a single time in history the stock market did not mean-revert (trend mean), after a sharp decline. A lot of people argue ‘this time is different’ because of the Fed’s extraordinary actions and Obama’s big stimulus plan. I wonder how in the past the policy makers had done anything different: didn’t they also try to stimulate, but with no avail???

Partly due to flight to quality, Treasuries have been rallying all year long. Days ago, the yields for the short-term treasuries even turned to negative. What to expect next? Is Treasury the next bubble to burst? PIMCO’s Bill Gross analyzes the situation (source: Bloomberg): 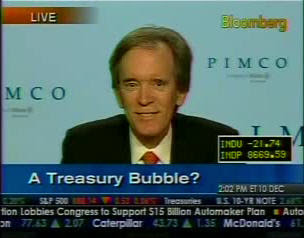 Deflation worry is almost everywhere in the world.  The US, Switzerland…and now China.  With price level peaked in the first half of 2008, I expect the y-o-y inflation number, almost with certainty, will turn to negative in early 2009.

BEIJING — The collapse in global and local commodity prices drove China's consumer-price inflation to its lowest rate in nearly two years in November. It is now more likely inflation in China will be in negative territory or close to it by early next year, adding to pressure on the government to shore up demand to bolster China's weakening economy.

The consumer-price index in November was 2.4% higher than a year ago, down from October's 4.0% reading and far below this year's peak of 8.7%. Wholesale prices have also fallen, reflecting the global correction in prices for food, fuel and raw materials. The World Bank's index of agricultural commodities fell 7.2% in November from October and its index of metal and mineral prices fell 13%.

November marked the fourth consecutive month-on-month fall in China's consumer-price index. Nonfood inflation, China's closest equivalent to a measure of core inflation, dropped to 0.6% year-on-year in November, the lowest level since January 2007, after a 1.6% reading in October.

With the rapid price declines in recent months, by early 2009, when the consumer-price index will be calculated relative to the peak prices early this year, headline inflation could be negative. That has raised the specter of deflation, or a sustained period of falling prices. Deflation, which can be highly difficult for governments to reverse, would add a further drag to China's economy.

Qu Hongbin, chief China economist for HSBC, now expects inflation to average minus 0.2% in 2009, a reversal from his previous forecast of a 2.5% rise. "This means that the central bank will have to maximize its efforts to ease policy in the coming quarters," he said. He predicted interest rates will be lowered by two percentage points by mid-2009.

At the start of this year, China's government, like many, was focused on taming inflation, which was running at decade-high levels, thanks mainly to surging food prices. The recent trend seems to show a reversal in prices, rather than contracting demand.

Economists worry about deflation because of its potential for creating a self-reinforcing negative spiral: If consumers expect prices to fall, they will put off purchases, which depresses demand and further lowers prices.