Oliver Hart, one of the most prominent economists in micro theory, with Zingales at University of Chicago, says economists have abandoned their principle and government lacks a coherent strategy in their dealing with the crisis.  So what's the alternative to the problem of "too big to fail"?

This year will be remembered not just for one of the worst financial crises in American history, but also as the moment when economists abandoned their principles. There used to be a consensus that selective intervention in the economy was bad. In the last 12 months this belief has been shattered.

Practically every day the government launches a massively expensive new initiative to solve the problems that the last day's initiative did not. It is hard to discern any principles behind these actions. The lack of a coherent strategy has increased uncertainty and undermined the public's perception of the government's competence and trustworthiness.

The Obama administration, with its highly able team of economists, has a golden opportunity to put the country on a better path. We believe that the way forward is for the government to adopt two key principles. The first is that it should intervene only when there is a clearly identified market failure. The second is that government intervention should be carried out at minimum cost to taxpayers.

How do these principles apply to the present crisis? First, the market economy provides mechanisms for dealing with difficult times. Take bankruptcy. It is often viewed as a kind of death, but this is misleading. Bankruptcy is an opportunity for a company (or individual) to make a fresh start. A company in financial distress faces the danger that creditors will try to seize its assets. Bankruptcy gives it some respite. It also provides an opportunity for claimants to figure out whether the company's financial trouble was the result of bad luck or bad management, and to decide what should be done. Short-cutting this process through a government bailout is dangerous. Does the government really know whether a company should be saved?

As an example of an effective bankruptcy mechanism, one need look no further than the FDIC procedure for banks. When a bank gets into trouble the FDIC puts it into receivership and tries to find a buyer. Every time this procedure has been invoked the depositors were paid in full and had access to their money at all times. The system works well.

From this perspective, one must ask what would have been so bad about letting Bear Stearns, AIG and Citigroup (and in the future, General Motors) go into receivership or Chapter 11 bankruptcy? One argument often made is that these institutions had huge numbers of complicated claims, and that the bankruptcy of any one of them would have led to contagion and systemic failure, causing scores of further bankruptcies. AIG had to be saved, the argument goes, because it had trillions of dollars of credit default swaps with J.P. Morgan. These credit default swaps acted as hedges for trillions of dollars of credit default swaps that J.P. Morgan had with other parties. If AIG had gone bankrupt, J.P. Morgan would have found itself unhedged, putting its stability and that of others at risk.

This argument has some validity, but it suggests that the best way to proceed is to help third parties rather than the distressed company itself. In other words, instead of bailing out AIG and its creditors, it would have been better for the government to guarantee AIG's obligations to J.P. Morgan and those who bought insurance from AIG. Such an action would have nipped the contagion in the bud, probably at much smaller cost to taxpayers than the cost of bailing out the whole of AIG. It would also have saved the government from having to take a position on AIG's viability as a business, which could have been left to a bankruptcy court. Finally, it would have minimized concerns about moral hazard. AIG may be responsible for its financial problems, but the culpability of those who do business with AIG is less clear, and so helping them out does not reward bad behavior.

Similar principles apply to the housing market. It appears that many people thought that house prices would never fall nationally, and made financial decisions based on this premise. The adjustment to the new reality is painful. But past mistakes do not constitute a market failure. Thus it makes no sense for the government to support house prices, as some economists have suggested.

Where there is arguably a market failure is in mortgage renegotiations. Many mortgages are securitized, and the lenders are dispersed and cannot easily alter the terms of the mortgage. It is unlikely that the present situation was anticipated when the loan contracts were written. Government initiatives at facilitating renegotiation therefore make a lot of sense.

Our desire for a principled approach to this crisis does not arise from an academic need for intellectual coherence. Without principles, policy makers inevitably make mistakes and succumb to lobbying pressure. This is what happened with the Bush administration. The Obama administration can do better.

How about a payroll tax cut? 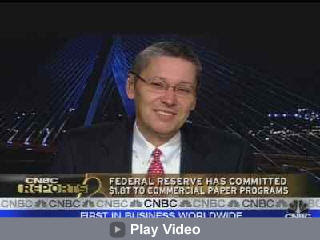