Krugman on government spending in crisis

Paul Krugman on NBER’s recession call and his assessment on the current state of the economy (source: CNBC) 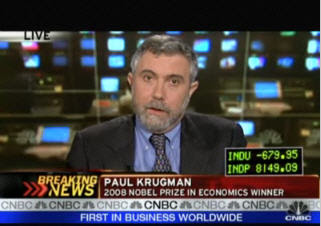 Right now there’s intense debate about how aggressive the United States government should be in its attempts to turn the economy around. Many economists, myself included, are calling for a very large fiscal expansion to keep the economy from going into free fall. Others, however, worry about the burden that large budget deficits will place on future generations.

But the deficit worriers have it all wrong. Under current conditions, there’s no trade-off between what’s good in the short run and what’s good for the long run; strong fiscal expansion would actually enhance the economy’s long-run prospects.

The claim that budget deficits make the economy poorer in the long run is based on the belief that government borrowing “crowds out” private investment — that the government, by issuing lots of debt, drives up interest rates, which makes businesses unwilling to spend on new plant and equipment, and that this in turn reduces the economy’s long-run rate of growth. Under normal circumstances there’s a lot to this argument.

But circumstances right now are anything but normal. Consider what would happen next year if the Obama administration gave in to the deficit hawks and scaled back its fiscal plans.

Would this lead to lower interest rates? It certainly wouldn’t lead to a reduction in short-term interest rates, which are more or less controlled by the Federal Reserve. The Fed is already keeping those rates as low as it can — virtually at zero — and won’t change that policy unless it sees signs that the economy is threatening to overheat. And that doesn’t seem like a realistic prospect any time soon.

What about longer-term rates? These rates, which are already at a half-century low, mainly reflect expected future short-term rates. Fiscal austerity could push them even lower — but only by creating expectations that the economy would remain deeply depressed for a long time, which would reduce, not increase, private investment.

The idea that tight fiscal policy when the economy is depressed actually reduces private investment isn’t just a hypothetical argument: it’s exactly what happened in two important episodes in history.

The first took place in 1937, when Franklin Roosevelt mistakenly heeded the advice of his own era’s deficit worriers. He sharply reduced government spending, among other things cutting the Works Progress Administration in half, and also raised taxes. The result was a severe recession, and a steep fall in private investment.

The second episode took place 60 years later, in Japan. In 1996-97 the Japanese government tried to balance its budget, cutting spending and raising taxes. And again the recession that followed led to a steep fall in private investment.

Just to be clear, I’m not arguing that trying to reduce the budget deficit is always bad for private investment. You can make a reasonable case that Bill Clinton’s fiscal restraint in the 1990s helped fuel the great U.S. investment boom of that decade, which in turn helped cause a resurgence in productivity growth.

What made fiscal austerity such a bad idea both in Roosevelt’s America and in 1990s Japan were special circumstances: in both cases the government pulled back in the face of a liquidity trap, a situation in which the monetary authority had cut interest rates as far as it could, yet the economy was still operating far below capacity.

And we’re in the same kind of trap today — which is why deficit worries are misplaced.

One more thing: Fiscal expansion will be even better for America’s future if a large part of the expansion takes the form of public investment — of building roads, repairing bridges and developing new technologies, all of which make the nation richer in the long run.

Should the government have a permanent policy of running large budget deficits? Of course not. Although public debt isn’t as bad a thing as many people believe — it’s basically money we owe to ourselves — in the long run the government, like private individuals, has to match its spending to its income.

But right now we have a fundamental shortfall in private spending: consumers are rediscovering the virtues of saving at the same moment that businesses, burned by past excesses and hamstrung by the troubles of the financial system, are cutting back on investment. That gap will eventually close, but until it does, government spending must take up the slack. Otherwise, private investment, and the economy as a whole, will plunge even more.

The bottom line, then, is that people who think that fiscal expansion today is bad for future generations have got it exactly wrong. The best course of action, both for today’s workers and for their children, is to do whatever it takes to get this economy on the road to recovery.