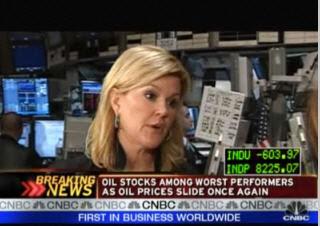 And her op-ed piece on FT, “America must keep consumer liquidity flowing“.

As an analyst, it is my job to do fundamental research and call it as I see it, and my bailiwick is financials. My outlook has been negative for over a year and, technically, I have been “right” on my calls. Seeing massive capital destruction has brought me no pleasure, but unfortunately I see little on the horizon that would change my outlook. In fact, after observing the US economy so derailed, I feel that I must act as a citizen of this great country to attempt to offer solutions to this economic train wreck we are all involved in.

First, I am more bearish today than I have been in the past 18 months. In so far as the market has impacted on the economy, capital destruction has been so intense that multi-trillions in capital raised by institutions through both private and public capital has gone to plug holes and not stabilise the effects of shrinking liquidity to corporations and consumers. More than $3,000bn (€2,365bn, £1,955bn) of available credit has been expunged from the markets and therefore corporate and consumer borrowers so far this year.

I estimate that the mortgage market will shrink for the first time in US history and that the credit card market will be 18 months behind it. While just over 70 per cent of US households have access to credit cards, 90 per cent of these people use credit cards as a cash-flow management vehicle, or revolve payments at least once a year. While the credit card market is small relative to the mortgage market, it has grown to play a key role in consumer liquidity. Declining liquidity here will have disastrous effects on consumer spending and the economy. My primary concern is preserving liquidity to consumers, who command more than two-thirds of gross domestic product.

There is no doubt that time will be the greatest healer, but there is a strong argument for putting the financial system through a methadone-clinic-style rehabilitation as opposed to the “cold sweats” rehab that we face. The US government appears to feel the same, which is why various versions of direct government lending and quasi- as well as real bail-outs have been announced. Certainly, credit was extended to unworthy borrowers, but the baby is now being thrown out with the bath water. I expect more broad-based credit contractions but, specifically, more than $2,000bn in credit lines to be cut in reaction to risk aversion, constrained capital and regulatory change.

Here are some easily adoptable changes that would make a difference.

First, re-regionalise lending. Since the early 1990s, key bank products, mortgages and credit card lending were rapidly consolidated nationally. Banking went from “knowing your customer” or local lending, to relying on what have proven to be unreliable FICO credit scores and centralised underwriting. The government should now motivate local lenders (many of which have clean balance sheets) to re-widen their product offering to include credit cards and encourage the mega banks to provide servicing and processing facilities to banks that sold off these capabilities years ago.

Second, expand the Federal Deposit Insurance Corporation’s guarantee for bank debt. Banks need to know they can access reasonably priced credit for an extended period to continue to extend new credit lines. Any semi-conscious bank management team knows that capital and liquidity are precious and therefore is hoarding both.

Fourth, amend the proposal on Unfair and Deceptive Lending Practices that is set to be adopted in 2010. The proposal includes one major change that will lead to a severe unintended consequence – pulling credit from consumers. Restricting lenders’ ability to reprice an unsecured loan will cause them to stop lending or to lend less. This change could cut over $2,000bn in unused credit card lines, or over 40 per cent of unused credit lines. With so many Americans relying on their credit cards as a major source of liquidity, it would be equivalent to a major pay cut.

This is no time for partisanship. The situation is too dire. These changes are ones I would never have imagined endorsing a year ago, but these are extraordinary times.

The writer is managing director of Oppenheimer & Co.

Facing sharp fall of its export in coming quarters, Chinese government seems to reverse its course of letting Yuan appreciate against the US dollar (source: FT).

The renminbi posted a record one-day fall against the dollar on Monday as speculation mounted that the Chinese authorities might use a weaker currency to spur economic growth.

The speculation was triggered after the People’s Bank of China set an unexpectedly high central parity in the dollar/renminbi rate.

The central bank manages the currency around its central parity rate, allowing it to fluctuate by 0.5 per cent on any one day.

As dealing started yesterday, traders pushed the renminbi to the limit of its trading band for only the second time. The renminbi closed the session at Rmb6.8842, down 0.9 per cent from Friday’s close.

This was the renminbi’s largest one-day fall against the dollar since it was de-pegged from the US currency in July 2005, and took the currency to its weakest level since June 17.

After pressure from the US, which argued that China’s cheap currency was giving its exports an unfair advantage, China let the renminbi appreciate by 20 per cent in the three years following July 2005.

However, the renminbi has remained stable against the dollar since July this year, raising speculation that the gradual appreciation of the Chinese currency might be coming to an end.

Analysts said comments from Hu Jintao, China’s president, over the weekend had helped raise the prospect that China was moving towards a new foreign- exchange policy as the global slowdown deepened.

President Hu, speaking about the difficulties facing the economy and government, warned that Chinese competitiveness could be undermined by the current econ­omic downturn. He also said domestic and global economic weakness could test the grip of the ruling Communist party.

“This is clearly a reference to the fact that weak growth is likely to lead to significant social unrest,” said Steve Barrow at Standard Bank.

The renminbi also weakened in the offshore forwards market.

Higher education as global commodity: the other way around

While Chinese and Indians are flooding into much more expensive American universities, more Americans are going to universities overseas for their cheaper tuition.  Not only for a study-abroad semester, but for the entire degree.  One of their favorite destinations: Scotland. (source: NYT)

Official recession watchers at the NBER said today that the U.S. is recession, and it began in December 2007. Here is the text of their statement.

The Business Cycle Dating Committee of the National Bureau of Economic Research met by conference call on Friday, November 28. The committee maintains a chronology of the beginning and ending dates (months and quarters) of U.S. recessions. The committee determined that a peak in economic activity occurred in the U.S. economy in December 2007. The peak marks the end of the expansion that began in November 2001 and the beginning of a recession. The expansion lasted 73 months; the previous expansion of the 1990s lasted 120 months.