Home » Uncategorized » Get ready: for a lost decade

Get ready: for a lost decade

Sometimes it's a complete takeover; sometimes it's a bailout in the form of capital injections.  Government has been in a steep learning curve in this crisis and thus far it lacked a coherent strategy.  As argued in this article below, an one-time experience of Great Depression does not at all guarantee we will do absolutely better this time; Politics works in its own twisted mechanism, especially in a democracy.  So don't be surprised if we have a Japan-like lost decade or even another Great Depression.

How many times have you heard that we've learned the lessons of the Great Depression and won't repeat the same mistakes? 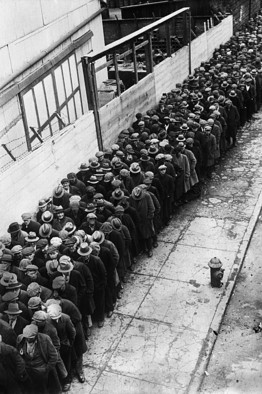 That statement is a bit of a false promise, since there was only one Great Depression, and many, many steps were taken and not taken, with no chance to rerun the experiment over and over to figure out what worked, or would have worked, and what didn't.

Letting hundreds of banks collapse, destroying savings and confidence, is one mistake we won't make again. But many want to insist, without evidence, that more government spending would have ended the depression. That's the direction the Obama administration is taking. Others say government did not do enough to restore business confidence, or did too much to damage it, piling on taxes, regulation and labor unions. This at least is firmer ground. Plenty of evidence from history shows that actions hostile to business tend to be related to an absence of prosperity.

But more important than these talismanic assurances about what we've learned from the Great Depression is the mistake in assuming that, even if we had a coherent view of what should be done, coherent polices would therefore be implemented.

This has little relation to how policy is made in a democracy.

Policy is always bad to a degree, but long periods of prosperity tend to be self-reinforcing since powerful interests are born with the means and motive to preserve the status quo. That status quo may really be a contributor to prosperity, such as regulatory restraint and moderate tax rates. That status quo may in some respects be ill-advised, such as excessive subsidy to housing debt.

But once prosperity blows up, the quasi-virtuous policy circle becomes an unvirtuous one as new interest groups come to the fore to exploit an appetite, previously weak, to impose their costly or vindictive wish lists. And even well-meaning policy gets twisted and rendered incoherent.

It's already happening to our banking bailout. If injecting government capital to improve confidence in banks was a good idea, it did nothing to improve the banks' own confidence in their borrowers. Yet now that banks have government capital, they're being pressed to lend to politically favored constituents regardless of their own judgment about whether the borrower is good for the money.

Or take the gathering auto bailout: Taxpayer dollars are being thrown at Detroit auto makers to make them "viable," even as Congress imposes new fuel-mileage mandates requiring them to incur tens of billions in costs unlikely to be recouped from their customers — the definition of "nonviable."

Mr. Obama's troops palpitate with excitement at the prospect of $1 trillion in "stimulus," though any net benefit to the economy likely will be incidental. Al Gore has thrown out the window any unpopular carbon taxes in favor of direct subsidies to his green energy investments. He sees the moment for what it is — alarm about global warming has degenerated into a pretext. Billions will be diverted from useful purposes to create "green jobs" that deliver no meaningful impact on climate or the accumulation of atmospheric carbon.

Large "confidence" costs were always destined to flow from the extreme steps being taken, even if advisable, to prop up the economy. The federal government's alternating takeovers and bailouts of companies are inherently destabilizing and create massive uncertainty in investors and businesses. The Fed's shocking steps to print money and acquire every kind of private asset and, soon perhaps, washing machines and Chevy Tahoes, may in retrospect be seen as just the right medicine. At the moment, no rational investor or business manager looks upon such doings with confidence in our economic future.

On top of it all, the Madoff scandal is peculiarly demoralizing in ways that may make its impact greater than the sum of its parts.

Our point here is that the bad policy vicious circle probably has a long way to run. While it's still possible to entertain wild hopes about an Obama administration, such hopes are partly self-liquidating on closer inspection — they exist in the first place only because Mr. Obama has given us so little to go on, except campaign boilerplate.

Bottom line: Politics is in charge — in a way that makes a lost decade of subpar prosperity more likely than not.