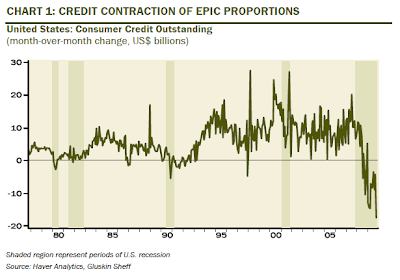 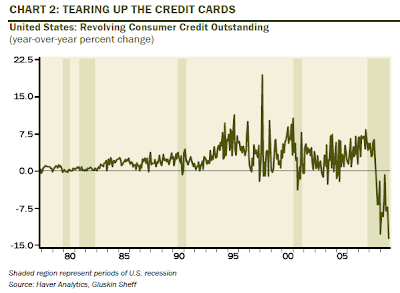 This historical credit contraction should give pause to the argument for sharp economic recovery. The contraction is a result of both banks’ unwillingness to lend and consumers’ caution toward consumption on credit. This, not surprisingly, coincides with rising personal saving rate. 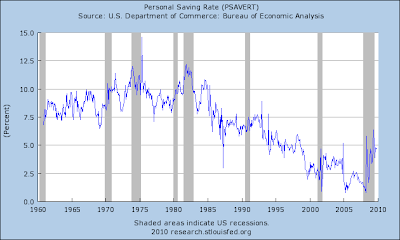 U.S. consumers in November reduced borrowing by the most on record, cutting credit card use by nearly 20% even as the economy recovers.

Consumer credit outstanding decreased at a seasonally adjusted annual rate of 8.5% to $2.465 trillion.

The $17.5 billion tumble is the largest since the Fed began keeping records in 1943.

Economists surveyed by Dow Jones Newswires had forecast a $6 billion drop in consumer credit. It was the 10th drop in a row. Consumer credit fell $4.2 billion in October.

Household debt began dropping in the summer of 2008. The financial crisis struck and sparked panic, startling people into taking a serious look at their balance sheets.

While weaning oneself off debt is considered good from a personal finance viewpoint, widespread deleveraging among U.S. households has reduced spending, an omen for the economy.

Consumer spending makes up two-thirds of gross domestic product, the measure of economic activity. Their spending needs to grow for the economy to recover into 2010. But some banks are making it hard for people to get loans. And the job market hasn’t healed; data Friday showed payrolls fell in December, even more than expected.

Retail sales rose strongly in October and November. The Fed report Friday suggested people are dipping into savings to support their spending. Revolving credit, or credit-card use, fell by $13.7 billion to $874.0 billion. That was a record 14th straight drop. At 18.5%, the fall was the biggest since December 1974. Credit-card use fell 9.9% in October and 10.5% in September.

Non-revolving credit, including automobile and mobile home loans, decreased in November by 2.9%, or $3.8 billion, to $1.591 trillion.

The consumer-credit data exclude home mortgages and other real estate-secured loans. These tend to be highly volatile from month to month and are frequently revised. But the report still has interesting details on how Americans finance their lifestyles.

← Washington, we might have a problem China became world’s largest auto producer and consumer →