Credit Card: The Next Crunch

Meredith Whitney also has a piece on today’s Journal.

Few doubt the importance of consumer spending to the U.S. economy and its multiplier effect on the global economy, but what is underappreciated is the role of credit-card availability in that spending. Currently, there is roughly $5 trillion in credit-card lines outstanding in the U.S., and a little more than $800 billion is currently drawn upon. While those numbers look small relative to total mortgage debt of over $10.5 trillion, credit-card debt is revolving and accordingly being paid off and drawn down over and over, creating a critical role in commerce in America. 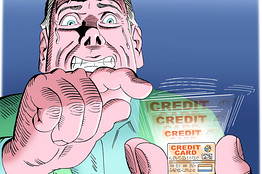 Just six months ago, I estimated that at least $2 trillion of available credit-card lines would be expunged from the system by the end of 2010. However, today, that estimate now looks optimistic, as available lines were reduced by nearly $500 billion in the fourth quarter of 2008 alone. My revised estimates are that over $2 trillion of credit-card lines will be cut inside of 2009, and $2.7 trillion by the end of 2010.

Inevitably, credit lines will continue to be reduced across the system, but the velocity at which it is already occurring and will continue to occur will result in unintended consequences for consumer confidence, spending and the overall economy. Lenders, regulators and politicians need to show thoughtful leadership now on this issue in order to derail what I believe will be at least a 57% contraction in credit-card lines.

There are several factors that are playing into this swift contraction in credit well beyond the scope of the current credit market disruption. First, the very foundation of credit-card lending over the past 15 years has been misguided. In order to facilitate national expansion and vast pools of consumer loans, lenders became overly reliant on FICO scores that have borne out to be simply unreliable. Further, the bulk of credit lines were extended during a time when unemployment averaged well below 6%. Overly optimistic underwriting standards made more borrowers appear creditworthy. As we return to more realistic underwriting standards, certain borrowers will no longer appear worth the risk, and therefore lines will continue to be pulled from those borrowers.

Second, home price depreciation has been a more reliable determinant of consumer behavior than FICO scores. Hence, lenders have reduced credit lines based upon “zip codes,” or where home price depreciation has been most acute. Such a strategy carries the obvious hazard of putting good customers in more vulnerable liquidity positions simply because they live in a higher risk zip code. With this, frequency of default is increased. In other words, as lines are pulled and borrowing capacity is reduced, paying borrowers are pushed into vulnerable financial positions along with nonpaying borrowers, and therefore a greater number of defaults in fact occur.

Third, credit-card lenders are currently playing a game of “hot potato,” in which no one wants to be the last one holding an open credit-card line to an individual or business. While a mortgage loan is largely a “monogamous” relationship between borrower and lender, an individual has multiple relationships with credit-card providers. Thus, as lines are cut, risk exposure increases to the remaining lender with the biggest line outstanding.

Here, such a negative spiral strategy necessitates immediate action. Currently five lenders dominate two thirds of the market. These lenders need to work together to protect one another and preserve credit lines to able paying borrowers by setting consortium guidelines on credit. We, as Americans, are all in the same soup here, and desperate times are requiring of radical and cooperative measures.

And fourth, along with many important and necessary mandates regarding fairness to consumers, impending changes to Unfair and Deceptive Acts or Practices (UDAP) regulations risk the very real unintended consequence of cutting off vast amounts of credit to consumers. Specifically, the new UDAP provisions would restrict repricing of risk, which could in turn restrict the availability of credit. If a lender cannot reprice for changing risk on an unsecured loan, the lender simply will not make the loan. This proposal is set to be effective by mid-2010, but talk now is of accelerating its adoption date. Politicians and regulators need to seriously consider what unintended consequences could occur from the implementation of this proposal in current form. Short of the U.S. government becoming a direct credit-card lender, invariably credit will come out of the system.

Over the past 20 years, Americans have also grown to use their credit card as a cash-flow management tool. For example, 90% of credit-card users revolve a balance (i.e., don’t pay it off in full) at least once a year, and over 45% of credit-card users revolve every month. Undeniably, consumers look at their unused credit balances as a “what if” reserve. “What if” my kid needs braces? “What if” my dog gets sick? “What if” I lose one of my jobs? This unused credit portion has grown to be relied on as a source of liquidity and a liquidity management tool for many U.S. consumers. In fact, a relatively small portion of U.S. consumers have actually maxed out their credit cards, and most currently have ample room to spare on their unused credit lines. For example, the industry credit line utilization rate (or percentage of total credit lines outstanding drawn upon) was just 17% at the end of 2008. However, this is in the process of changing dramatically.

Without doubt, credit was extended too freely over the past 15 years, and a rationalization of lending is unavoidable. What is avoidable, however, is taking credit away from people who have the ability to pay their bills. If credit is taken away from what otherwise is an able borrower, that borrower’s financial position weakens considerably. With two-thirds of the U.S. economy dependent upon consumer spending, we should tread carefully and act collectively.