Inspired by the recent report on Wall Street Journal that China is facing a college grad glut with millions of college grads failing to find job upon graduation, in this short note I dig deeper into China’s college boom and briefly analyze what happened in the last decade in China’s higher education.

According to the Journal article, in 2009, “up to one-third of last year’s 5.6 million university graduates are still looking for work, and this year will see another 6.1 million hit the labor market”. The graph below shows a snapshot of a typical job fair for college job seekers. It is always crowded. 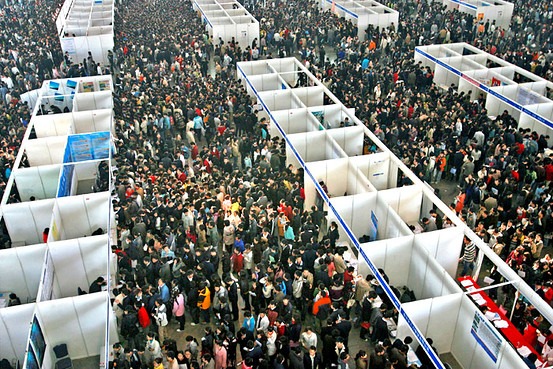 The following graph draws data from China’s National Bureau of Statistics and it shows that starting from 1999, China began its aggressive college expansion, pushing the annual college enrollment number from 1 million in 1998 to about 5.5 million in 2007. The rise was very sharp and dramatic. 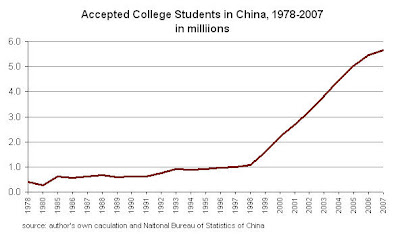 Next, I look at the average college acceptance rate, which is defined as the accepted college students each year as a percentage of the annual high school graduates. Again, we observe a similar jump in acceptance rate beginning in 1999, from a little over 40% in 1998 to staggering 84% in 2002. The rate since then has leveled off to 70%, which means 7 out of 10 high school graduates go to college in China. For a developing country, this is an AMAZING number. 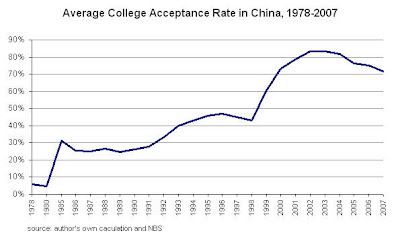 Economic theory tells us if there is an oversupply of college students, either the demand for college grads quickly catches up, or college students have to find their own way out. Otherwise, there will be a glut of labor supply. So what are the alternative routes?

The most natural solution is to go to graduate school. The strategy is, “hide in grad school and become more competitive”. This incentive exists everywhere in the world. In the US, the current recession surely will help lift graduate school enrollment. 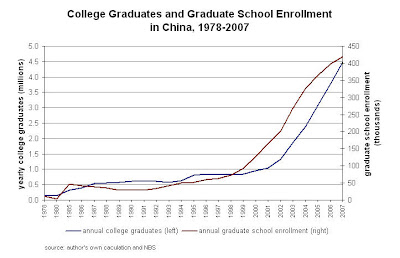 Alternatively, for better or for worse, people choose to go to overseas. A degree from foreign countries, especially from the US, is believed to give students more comparative advantage, and the relatively easy and open US immigration policy also played a role. The graph below looks at the correlation between college grads and students who went to overseas study. Again, we observe a sharp jump around the millennium. After 9/11, the number trended down but started to go up again in 2005. In 2007 alone, about 140,000 Chinese students went to overseas. 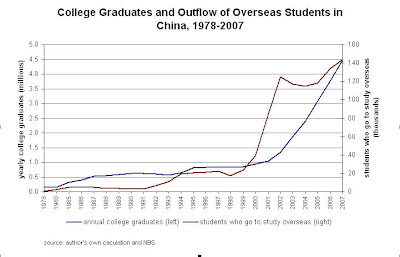 There are many reasons Chinese students chose to go to overseas, but the domestic labor market pressure certainly is one of the most important contributing factors.

In the long run, more people with higher education is good for China’s economic growth and development. In the short run, China has to solve the mismatching problem in the labor market.

← Is China leading the world out of mess? B- for stress test →