Lessons from ‘the lost decade’

Much of the financial news this month has revolved around the one-year anniversary of the Panic of 2008 — the collapse of Lehman Brothers, the takeover of Merrill Lynch, the government’s bailout of Wall Street.

But there’s another anniversary for investors. It is 10 years this weekend since the publication of “Dow 36,000: The New Strategy for Profiting From the Coming Rise in the Stock Market,” a popular seller that became the poster child of 1990s stock-market hubris.

Authors James K. Glassman and Kevin A. Hassett weren’t quite the Dan Browns of their day, but in their book they nonetheless claimed to have discovered a virtual secret code buried within the stock market. 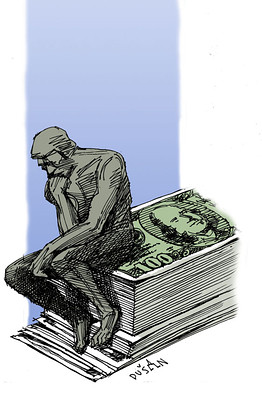 In a nutshell, they argued that, even in that period of wildly “irrational exuberance,” shares were massively undervalued. Their reading of history revealed that shares were far less risky over time than was widely assumed. As a result, they concluded that the Dow Jones Industrial Average, which at the time stood at 10300 or so, was really worth more than three times as much.

It’s easy to mock that brash forecast now. But few were laughing at the time. On the contrary, although only some on Wall Street were willing to take the arguments to these ridiculous extremes, many shared their underlying assumptions.

Back then, the only people subject to sustained derision on Wall Street were those who dissented. Anyone who warned that shares might disappoint was ignored. The few predicting a crash — let alone two — were considered cranks. (For the record: The Dow, which continues to enjoy a remarkable post-crash rally, rose another 2.2% last week; it’s up 50% since March. But it’s still below where it stood in September 1999.)
Beyond a sorry contemplation of the past 10 years, what does this anniversary offer investors? What have we learned from the last decade? And where do we go from here?

Here are seven lessons of a lost decade:

1 Don’t forget dividends. In the 1990s bubble, investors figured they were going to make all their money on capital gains. That’s a reason they were willing to buy shares paying out little or nothing.

Reality: Dividends have been investors’ life raft since. The Dow has fallen about 7% since the book came out. But when you include reinvested dividends, investors in the market are about even over that period.

2 Watch out for inflation. Price increases have been modest in the past decade, but during that period the dollar has still lost about 23% of its purchasing power.

So investors in the market have really gone backward. Ignoring inflation is a mistake too many are making again now as they keep all their money in bank accounts paying little or nothing. What matters isn’t just your nominal or headline return. It’s your return — after inflation.

3 Don’t overestimate long-term stock-market returns. It’s remarkable to replay all those foolish, over-optimistic assumptions you used to hear everywhere about the stock market — “Wall Street goes up by around 8% to 10% a year,” “shares will earn 7% above inflation over the long term” and so on.
What’s the truth? A global study conducted a few years ago by the London Business School suggested the average long-term return may have only been about 5% over inflation, rather than 7% or more.

That may not sound like a big difference, but over time it’s huge. It cuts your likely profits by a third over a single decade. And it means you run a much bigger risk that you will lose money over long periods.

4 Volatility matters. Be honest: Did you scale back your investments in March, when the Dow was below 7000? How about in 2002, when markets were in free-fall? Many people did. And no, it wasn’t just folly. On both occasions, share prices were roughly halved from their peak. Many people simply couldn’t afford the risk that prices could fall another 50%. Investors felt they were playing Russian roulette.

5 Price matters (my comment: or entry point matters). The biggest problem in 1999 was simply that over the previous 17 years the stock market had already gone up tenfold — from around Dow 1000 in 1982 to 10000 in 1999. Shares on average were heavily overvalued. No wonder they have been a poor investment since.

6 Don’t hurry. Too many investors rushed to “get on board” 10 years ago, and paid the price. Wall Street encourages the habit: Fund managers and brokers like to use the grossly misleading phrase “let’s put your money to work” for this reason, even though anyone who “put their money to work” in 1999 lost money. Memo to potential investors: There is never a hurry, never a reason to rush.

7 Don’t forget your lifeboats! The biggest problem with the Titanic wasn’t that the captain was expecting a safe journey when he set sail. It was that the management was expecting a safe journey when it ordered so few lifeboats. Hope for the best — but plan for the worst. This is the reason for including nonequities in a portfolio, including inflation-protected government bonds and other assets.

Where are we now? What can we expect for the future?

The good news is that markets are no longer anywhere near as overvalued as they were 10 (or two) years ago. Global markets, which hit a peak of about 25 times forecast earnings in early 2000, are now a more reasonable 16 times. The global dividend yield has doubled to 2.5%. The bad news is shares aren’t cheap either. Skeptical value managers — a rare but valuable breed — argue shares may be 10% or 20% above fair value.

That’s an argument for holding a good amount of shares — and plenty of dry powder.

← Rosenberg: Too much risk in equity market Economic recovery is under way →