The forecast total bank loss is around $3.1 trillion (some forecast $4 trillion). By far banks have written down $1.1 trillion, still $2 trillion to go. The question is: for the sickest banks, should they be let fail, or be nationalized or become “zoombie banks”, as happened in Japan?

Following his four ways out of this mess, Brad DeLong at Berkeley Economics says Obama should use one of the three narratives to explain to the public his rescue plan to gather more support:

It seems to me that the Obama administration can go with any of three different truths as it tries to explain its banking programs to the world:

V or W? The alphabetical debate on China’s recovery

China’s 1Q GDP grows 6.1%, the worst since Tiananmen Square Incident in 1989-90, when it was 4%. But data in fixed investment and industrial production had a strong surge, fanning the positive prediction that China will be the first to get out of the current global economic slump. I am cautiously optimistic on China, but I want to see more private investment encouraged by government stimulus plan. 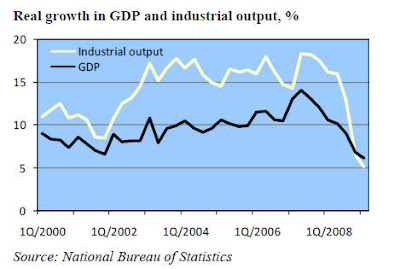 The 6.1% year-to-year GDP growth in the first quarter — way down from the double-digit growth levels of recent years — does belie some encouraging signs for the economy.

Manufacturing output, up 8.3% year-to-year in March, is growing at a healthy clip again. A range of indicators, from rebounding car sales to faster fixed asset investment growth, all look positive.

In sum, a belief that the last three months represents the trough of China’s slowdown has taken hold, with credit due to last autumn’s $586 billion fiscal stimulus and a massive surge in lending from state-owned banks, mainly to state-owned enterprises.

Now the debate among economists is becoming more alphabetical.

Is this recovery V-shaped, with China set to return quickly to the high-level growth of recent years? Or is it more W-shaped, as a government spending-led recovery this year peters out and China’s longer term structural issues resurface?

The risk in Beijing’s spending-and-lending stimulus measures is of an eventual, large misallocation of resources.

That the state-owned sector is driving the current recovery is clear. There are two purchasing managers’ indices in China: The one that reflects activity among state-owned enterprises is now in positive territory, while the private sector-weighted index — calculated by CLSA Asia Pacific Markets — is still contracting.

Optimists argue Beijing’s stimulus spending via state companies will have a multiplier effect on the rest of the economy.

But the danger of crowding out potentially more efficient private-sector activity is high. In the absence of helpful external factors — namely a resumption of Western demand for Chinese exports — the government pump will continue to be the only thing preventing China’s V-shaped recovery from turning W-shaped.

China’s fiscal strength will give it leeway to keep money flowing into state enterprises and projects if need be — Stimulus II, so to speak. But reliance on government spending isn’t a long-term alternative.