Greg Mankiw writes on NYT that the Fed should consider ways to make interest rate negative so that cash hoarding becomes less attractive.  He proposes two ways to achieve the goal, both seemingly absurd:

1. The Fed announces that certain series (about 10% of circuting) of notes will become worthless;
2. Increase inflation to make real return of holding money negative.

I am fine with the first lottery approach.  The idea is very innovative, but I am worried about how foreigners holding US $ will react –will they dump the dollar?  The second approach of money printing is what central bankers in the US and UK have already been stealthly doing (they just don't want to say it loud). The question again rests on what should be the appropriate inflation equilibrium.  If the new normal is 4%-6%, not 2%, how should central bankers convince investors into believing they won't inflate even further?  Will the hard-won credit of central bankers by Paul Volcker be totally reversed?   This is a dangerous experiment and I am not sure how it will play out.  But one thing I am sure is that the Great Moderation is totally over, and we will see more volativitily in output and inflation in coming years.

WITH unemployment rising and the financial system in shambles, it’s hard not to feel negative about the economy right now. The answer to our problems, however, could well be more negativity. But I’m not talking about attitude. I’m talking about numbers. 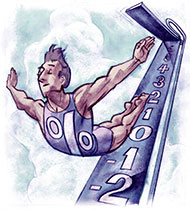 Let’s start with the basics: What is the best way for an economy to escape a recession?

Until recently, most economists relied on monetary policy. Recessions result from an insufficient demand for goods and services — and so, the thinking goes, our central bank can remedy this deficiency by cutting interest rates. Lower interest rates encourage households and businesses to borrow and spend. More spending means more demand for goods and services, which leads to greater employment for workers to meet that demand.

The problem today, it seems, is that the Federal Reserve has done just about as much interest rate cutting as it can. Its target for the federal funds rate is about zero, so it has turned to other tools, such as buying longer-term debt securities, to get the economy going again. But the efficacy of those tools is uncertain, and there are risks associated with them.

In many ways today, the Fed is in uncharted waters.

So why shouldn’t the Fed just keep cutting interest rates? Why not lower the target interest rate to, say, negative 3 percent?

At that interest rate, you could borrow and spend $100 and repay $97 next year. This opportunity would surely generate more borrowing and aggregate demand.

The problem with negative interest rates, however, is quickly apparent: nobody would lend on those terms. Rather than giving your money to a borrower who promises a negative return, it would be better to stick the cash in your mattress. Because holding money promises a return of exactly zero, lenders cannot offer less.

Unless, that is, we figure out a way to make holding money less attractive.

At one of my recent Harvard seminars, a graduate student proposed a clever scheme to do exactly that. (I will let the student remain anonymous. In case he ever wants to pursue a career as a central banker, having his name associated with this idea probably won’t help.)

Imagine that the Fed were to announce that, a year from today, it would pick a digit from zero to 9 out of a hat. All currency with a serial number ending in that digit would no longer be legal tender. Suddenly, the expected return to holding currency would become negative 10 percent.

That move would free the Fed to cut interest rates below zero. People would be delighted to lend money at negative 3 percent, since losing 3 percent is better than losing 10.

Of course, some people might decide that at those rates, they would rather spend the money — for example, by buying a new car. But because expanding aggregate demand is precisely the goal of the interest rate cut, such an incentive isn’t a flaw — it’s a benefit.

The idea of making money earn a negative return is not entirely new. In the late 19th century, the German economist Silvio Gesell argued for a tax on holding money. He was concerned that during times of financial stress, people hoard money rather than lend it. John Maynard Keynes approvingly cited the idea of a carrying tax on money. With banks now holding substantial excess reserves, Gesell’s concern about cash hoarding suddenly seems very modern.

If all of this seems too outlandish, there is a more prosaic way of obtaining negative interest rates: through inflation. Suppose that, looking ahead, the Fed commits itself to producing significant inflation. In this case, while nominal interest rates could remain at zero, real interest rates — interest rates measured in purchasing power — could become negative. If people were confident that they could repay their zero-interest loans in devalued dollars, they would have significant incentive to borrow and spend.

Having the central bank embrace inflation would shock economists and Fed watchers who view price stability as the foremost goal of monetary policy. But there are worse things than inflation. And guess what? We have them today. A little more inflation might be preferable to rising unemployment or a series of fiscal measures that pile on debt bequeathed to future generations.

Ben S. Bernanke, the Fed chairman, is the perfect person to make this commitment to higher inflation. Mr. Bernanke has long been an advocate of inflation targeting. In the past, advocates of inflation targeting have stressed the need to keep inflation from getting out of hand. But in the current environment, the goal could be to produce enough inflation to ensure that the real interest rate is sufficiently negative.

N. Gregory Mankiw is a professor of economics at Harvard. He was an adviser to President George W. Bush.

How bad is current recession?

Compare current recession with median of the past ones and with the current ones abroad:

Following my previous post on China entering deflation zone, I look at recent history of money supply (M1) in China and how it precedes inflation (CPI). As famously said by Milton Friedman “inflation is everywhere a monetary phenomenon“, China will be no exception.

I often wonder “unemployment” and “inflation”, which is a bigger evil. Modern monetary theory points to the latter, and I agree. But given more than 20m migrant workers out of work due to manufacturing plants shut down in the coastal area, maybe inflation concern has to rest, for now. 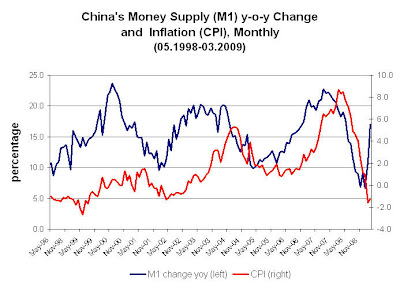 (click to enlarge; source: author’s own calculation and NBS)

If you look at the chart above carefully: in late 90s, China also had deflation and it was followed by a huge surge of money supply (at nearly 25% increase in the mid of 2000) , but inflation did not rise to a uncontrollable level, only about 2%. Then more money was pumped into the economy, and inflation finally rose to 5% level (not until 2004). This was in sharp contrast to the high-inflation era in early and mid 90s (see graph below). The only conclusion is China’s central bankers became much more experienced in controlling inflation. 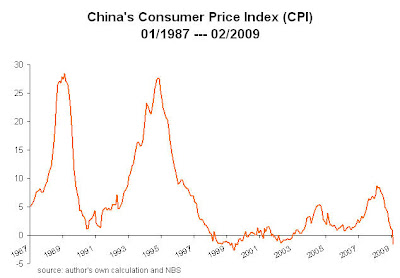 So what is the policy implication? Chinese government may need to pump more money into the economy and in a quick fashion. This is not a common average-Joe recession, so policy needs to be flexible and adaptive.

link to the jobless rate by state