Robert Barro at Harvard applies his analysis on crashes and depressions to the current recession (source: WSJ).

We learned two things. Periods without stock-market crashes are very safe, in the sense that depressions are extremely unlikely. However, periods experiencing stock-market crashes, such as 2008-09 in the U.S., represent a serious threat. The odds are roughly one-in-five that the current recession will snowball into the macroeconomic decline of 10% or more that is the hallmark of a depression.

What Are the Odds of a Depression?

International evidence suggests there is a 20% chance our stock-market crash will lead to much worse.

Central questions these days are how severe will the U.S. economic downturn be and how long will it last?

The most serious concern is that the downturn will become something worse than the largest recession of the post-World War II period — 1982, when real per capita GDP fell by 3% and the unemployment rate peaked at nearly 11%. Could we even experience a depression (defined as a decline in per-person GDP or consumption by 10% or more)? 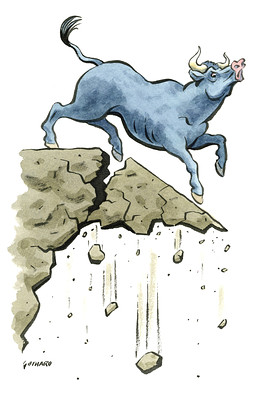 The U.S. macroeconomy has been so tame for so long that it’s impossible to get an accurate reading about depression odds just from the U.S. data. My approach uses long-term data for many countries and takes into account the historical linkages between depressions and stock-market crashes. (The research is described in “Stock-Market Crashes and Depressions,” a working paper Jose Ursua and I wrote for the National Bureau of Economic Research last month.)

The bottom line is that there is ample reason to worry about slipping into a depression. There is a roughly one-in-five chance that U.S. GDP and consumption will fall by 10% or more, something not seen since the early 1930s.

Our research classifies just two such U.S. events since 1870: the Great Depression from 1929 to 1933, with a macroeconomic decline by 25%, and the post-World War I years from 1917 to 1921, with a fall by 16%. We also assembled long-term data on GDP, consumption and stock-market returns for 33 other countries, sometimes going back as far as 1870. Our conjecture was that depressions would be closely connected to stock-market crashes (at least in the sense that a crash would signal a substantially increased chance of a depression).

This idea seems to conflict with the oft-repeated 1966 quip from Paul Samuelson that “The stock market has predicted nine of the last five recessions.” The line is clever, but it unfairly denigrates the predictive power of stock markets. In fact, knowing that a stock-market crash has occurred sharply raises the odds of depression. And, in reverse, knowing that there is no stock-market crash makes a depression less likely.

In the post-World War II period, the Organisation for Economic Co-operation and Development (OECD) countries were strikingly tranquil up to 2008. The worst macroeconomic event in that period came in Finland in the early 1990s. Sweden also faced a financial crisis in the early 1990s, though it reacted quickly and is now being touted as a possible guide for leading the U.S. out of its current economic crisis.

In applying our results to the current environment, we should consider that the U.S. and most other countries are not involved in a major war (the Iraq and Afghanistan conflicts are not comparable to World War I or World War II). Thus, we get better information about today’s prospects by consulting the history of nonwar events — for which our sample contains 209 stock-market crashes and 59 depressions, with 41 matched by timing. In this context, the probability of a minor depression, contingent on seeing a stock-market crash, is 20%, and the corresponding chance of a major depression is only 2%. However, it is still the case that depressions are very likely to feature stock-market crashes — 69% for minor depressions and 83% for major ones.

In the end, we learned two things. Periods without stock-market crashes are very safe, in the sense that depressions are extremely unlikely. However, periods experiencing stock-market crashes, such as 2008-09 in the U.S., represent a serious threat. The odds are roughly one-in-five that the current recession will snowball into the macroeconomic decline of 10% or more that is the hallmark of a depression.

The bright side of a 20% depression probability is the 80% chance of avoiding a depression. The U.S. had stock-market crashes in 2000-02 (by 42%) and 1973-74 (49%) and, in each case, experienced only mild recessions. Hence, if we are lucky, the current downturn will also be moderate, though likely worse than the other U.S. post-World War II recessions, including 1982.

In this relatively favorable scenario, we may follow the path recently sketched by Federal Reserve Chairman Ben Bernanke, with the economy recovering by 2010. On the other hand, the 59 nonwar depressions in our sample have an average duration of nearly four years, which, if we have one here, means that it is likely recovery would not be substantial until 2012.

Given our situation, it is right that radical government policies should be considered if they promise to lower the probability and likely size of a depression. However, many governmental actions — including several pursued by Franklin Roosevelt during the Great Depression — can make things worse.

I wish I could be confident that the array of U.S. policies already in place and those likely forthcoming will be helpful. But I think it more likely that the economy will eventually recover despite these policies, rather than because of them.

Mr. Barro is a professor of economics at Harvard and a fellow at Stanford University’s Hoover Institution.