Home » Uncategorized » Migration in the US: Why people move less

Migration in the US: Why people move less

The economic theory goes: if people buy house rather than rent, they tend to move less; during the current housing crisis, a lot of people bought the house at the peak, in may cases, their mortgages are also under water, which provides even less incentives for people to move.

But America needs a more dynamic mobile workforce in the competitive global economy — These are all unintended consequences of a historical housing bubble.

Migration around the U.S. slowed to a crawl last year, especially for this decade’s boom towns, as a weak housing market and job insecurity forced many Americans to stay put.

Demographers say the dropoff in migration, shown in Census data to be released Thursday, is among the sharpest since the Great Depression. It marks the end of what Brookings Institution demographer William Frey calls a “migration bubble.”

As asset values rose fairly steadily in the past decade, Americans young and old moved around the country in search of jobs or better weather. In many cases, people living in higher-cost housing markets such as San Francisco and New York cashed in their real-estate winnings and moved to outlying counties, or to states like Florida and Nevada, hoping to find a cheaper house and pocket the difference. Now, “people are hanging tight; they’re too scared to do anything,” said Mr. Frey.

The data, covering the one-year period until July 1, 2008, show this effect across U.S. counties and metropolitan areas — another sign of how this recession has spared few industries or regions.

Migration typically slows during recessions. But in past downturns, the slowdown has been more regional in scope, with workers fleeing weaker job markets for places where companies were still hiring. In the deep 1980s recession, for instance, laid-off auto workers fled the industrial Midwest for energy-rich states in the South with more plentiful jobs.

What’s unique this time is migration has slowed almost everywhere. The sharpest year-to-year changes were among what demographers call “domestic migrants,” people who moved within the U.S. That doesn’t count population changes that result from births, deaths or immigration.

Older metro areas such as New York and San Francisco, which have seen residents move to faster-growing areas, are now losing fewer people. Cities in the formerly hot housing markets such as Nevada and Florida are seeing fewer arrivals and, in some cases, more people moving out than in.

At the local level, more people are staying in the city and postponing their move to the suburbs. In 2005-06, metropolitan areas with one million or more people saw a net 688,000 people leave their core counties. In 2007-08, a net 336,000 left, according to an analysis of Census data by Kenneth Johnson, senior demographer at the University of New Hampshire’s Carsey Institute.

“Fewer people are leaving the urban cores to go to the suburbs,” said Mr. Johnson.

International migration slowed moderately, according to the Census data. In 2005-06, the country absorbed a net of about one million immigrants. In 2007-08, that fell to a net gain of 890,000. The slowdown in international migration was sharpest in outer suburban areas, where the housing market has in general been worse than in core cities or closer-in suburbs.

The slumping economy, as well as depressed prices of just about every kind of asset, is behind many of these decisions to stay put. Jeff Fallon, a managing partner at a private-equity firm in Cleveland, made two trips to Florida last year looking to buy a home in the Sarasota area. But with the stock market down and real-estate prices still falling, Mr. Fallon decided to hold off for a bit.

“I was looking at a substantial amount of our personal wealth disappear as the stock market spiraled down,” he said. “It certainly had a lot of bearing on whether or not I was willing to invest in a second home.” 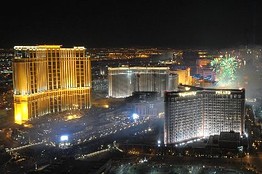 If the migration slump continues, it could slow down economic recovery in depressed housing markets such as Las Vegas.

The Census data show that the biggest falloffs were in the worst housing markets. In 2007-2008, the Phoenix area gained a net 51,000 domestic migrants, about half as many as two years ago.

Las Vegas increased by a net 14,000 domestic migrants, two-thirds fewer than two years ago. California’s Riverside-San Bernardino metro area, a once-booming market that has been hammered by foreclosures and job losses, lost domestic migrants for the first time since 1995-1996.

The migration slowdown, if it persists, could further delay the economic recovery in depressed housing markets such as Phoenix and Las Vegas. These places generally have a larger amount of unsold homes, and a disproportionate share of the economy is dependent on construction and other real estate-related trades.

Economists say the housing-centric economies will need to reduce their stock of unsold homes before any meaningful economic recovery takes place. That’s hard to do when fewer people are moving there.