All governments would like a weaker currency to ease the pain of the financial crisis — and nowhere more than the euro zone, where the soaring common currency is inflicting economic pain and exposing political tensions. The euro zone is likely to get its wish granted in 2009.

As political tensions mount, investor confidence in the euro will suffer, bringing about the devaluation needed to stop it falling apart.

Investors are aware of the tension, judging by the higher premiums they want for buying the debt of weaker euro-zone economies. Italian, Portuguese and Greek government debt trades at spreads of at least one percentage point above equivalent German 10-year bonds, the highest since the euro was created in 1999. That only makes sense if investors believe there is a possibility a euro-zone member might default or even quit the single currency. 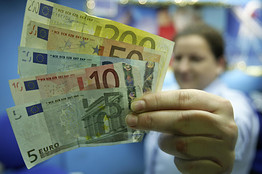 Weaker member states may be tempted to borrow even more to avoid a catastrophic slump, caused partly by the strength of the euro. In terms of purchasing power, the single currency is at least 20% overvalued against the dollar. With a U.K.-style devaluation out of the question, that is a particular problem for countries like Ireland and Spain, trying to restore their competitiveness and recover from burst property and construction bubbles. Credit Suisse reckons Irish and Spanish wages need to fall 20% to 30%, something no government could countenance.

In any other single currency area, this would be resolved via massive borrowing by a centralized agency, much like the U.S. Treasury, and fiscal transfers between regions. The euro zone has no mechanism for this to happen. Reluctantly resigned to spend more than it wanted to stimulate its own economy, Germany is still unwilling to fund a massive fiscal-stimulus package to revive the euro-zone economy. Hence the risk of disorderly borrowing by other countries, taking advantage of investor appetite for government bonds.

That won't please the Germans. After decades of hard work to build up their inflation-fighting credentials, they also fear they will be forced to pick up the tab if a member state defaults. On the other hand, it may stop the euro falling apart, and trigger the devaluation the eurozone economy so urgently needs.