Home » Uncategorized » Greenspan defends himself, and the Fed

Greenspan defends himself, and the Fed

The Fed Didn’t Cause the Housing Bubble

We are in the midst of a global crisis that will unquestionably rank as the most virulent since the 1930s. It will eventually subside and pass into history. But how the interacting and reinforcing causes and effects of this severe contraction are interpreted will shape the reconfiguration of our currently disabled global financial system. 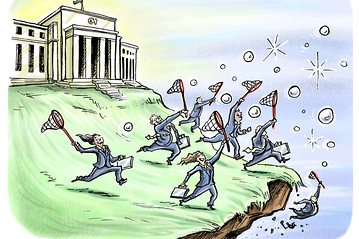 There are at least two broad and competing explanations of the origins of this crisis. The first is that the “easy money” policies of the Federal Reserve produced the U.S. housing bubble that is at the core of today’s financial mess.

The second, and far more credible, explanation agrees that it was indeed lower interest rates that spawned the speculative euphoria. However, the interest rate that mattered was not the federal-funds rate, but the rate on long-term, fixed-rate mortgages. Between 2002 and 2005, home mortgage rates led U.S. home price change by 11 months. This correlation between home prices and mortgage rates was highly significant, and a far better indicator of rising home prices than the fed-funds rate.

This should not come as a surprise. After all, the prices of long-lived assets have always been determined by discounting the flow of income (or imputed services) by interest rates of the same maturities as the life of the asset. No one, to my knowledge, employs overnight interest rates — such as the fed-funds rate — to determine the capitalization rate of real estate, whether it be an office building or a single-family residence.

The Federal Reserve became acutely aware of the disconnect between monetary policy and mortgage rates when the latter failed to respond as expected to the Fed tightening in mid-2004. Moreover, the data show that home mortgage rates had become gradually decoupled from monetary policy even earlier — in the wake of the emergence, beginning around the turn of this century, of a well arbitraged global market for long-term debt instruments.

U.S. mortgage rates’ linkage to short-term U.S. rates had been close for decades. Between 1971 and 2002, the fed-funds rate and the mortgage rate moved in lockstep. The correlation between them was a tight 0.85. Between 2002 and 2005, however, the correlation diminished to insignificance.

As I noted on this page in December 2007, the presumptive cause of the world-wide decline in long-term rates was the tectonic shift in the early 1990s by much of the developing world from heavy emphasis on central planning to increasingly dynamic, export-led market competition. The result was a surge in growth in China and a large number of other emerging market economies that led to an excess of global intended savings relative to intended capital investment. That ex ante excess of savings propelled global long-term interest rates progressively lower between early 2000 and 2005.

That decline in long-term interest rates across a wide spectrum of countries statistically explains, and is the most likely major cause of, real-estate capitalization rates that declined and converged across the globe, resulting in the global housing price bubble. (The U.S. price bubble was at, or below, the median according to the International Monetary Fund.) By 2006, long-term interest rates and the home mortgage rates driven by them, for all developed and the main developing economies, had declined to single digits — I believe for the first time ever. I would have thought that the weight of such evidence would lead to wide support for this as a global explanation of the current crisis.

However, starting in mid-2007, history began to be rewritten, in large part by my good friend and former colleague, Stanford University Professor John Taylor, with whom I have rarely disagreed. Yet writing in these pages last month, Mr. Taylor unequivocally claimed that had the Federal Reserve from 2003-2005 kept short-term interest rates at the levels implied by his “Taylor Rule,” “it would have prevented this housing boom and bust. “This notion has been cited and repeated so often that it has taken on the aura of conventional wisdom.

Aside from the inappropriate use of short-term rates to explain the value of long-term assets, his statistical indictment of Federal Reserve policy in the period 2003-2005 fails to address the aforementioned extraordinary structural developments in the global economy. His statistical analysis carries empirical relationships of earlier decades into the most recent period where they no longer apply.

Moreover, while I believe the “Taylor Rule” is a useful first approximation to the path of monetary policy, its parameters and predictions derive from model structures that have been consistently unable to anticipate the onset of recessions or financial crises. Counterfactuals from such flawed structures cannot form the sole basis for successful policy analysis or advice, with or without the benefit of hindsight.

Given the decoupling of monetary policy from long-term mortgage rates, accelerating the path of monetary tightening that the Fed pursued in 2004-2005 could not have “prevented” the housing bubble. All things considered, I personally prefer Milton Friedman’s performance appraisal of the Federal Reserve. In evaluating the period of 1987 to 2005, he wrote on this page in early 2006: “There is no other period of comparable length in which the Federal Reserve System has performed so well. It is more than a difference of degree; it approaches a difference of kind.”

How much does it matter whether the bubble was caused by inappropriate monetary policy, over which policy makers have control, or broader global forces over which their control is limited? A great deal.

If it is monetary policy that is at fault, then that can be corrected in the future, at least in principle. If, however, we are dealing with global forces beyond the control of domestic monetary policy makers, as I strongly suspect is the case, then we are facing a broader issue.

Global market competition and integration in goods, services and finance have brought unprecedented gains in material well being. But the growth path of highly competitive markets is cyclical. And on rare occasions it can break down, with consequences such as those we are currently experiencing. It is now very clear that the levels of complexity to which market practitioners at the height of their euphoria tried to push risk-management techniques and products were too much for even the most sophisticated market players to handle properly and prudently.

However, the appropriate policy response is not to bridle financial intermediation with heavy regulation. That would stifle important advances in finance that enhance standards of living. Remember, prior to the crisis, the U.S. economy exhibited an impressive degree of productivity advance. To achieve that with a modest level of combined domestic and borrowed foreign savings (our current account deficit) was a measure of our financial system’s precrisis success. The solutions for the financial-market failures revealed by the crisis are higher capital requirements and a wider prosecution of fraud — not increased micromanagement by government entities.

Any new regulations should improve the ability of financial institutions to effectively direct a nation’s savings into the most productive capital investments. Much regulation fails that test, and is often costly and counterproductive. Adequate capital and collateral requirements can address the weaknesses that the crisis has unearthed. Such requirements will not be overly intrusive, and thus will not interfere unduly in private-sector business decisions.

If we are to retain a dynamic world economy capable of producing prosperity and future sustainable growth, we cannot rely on governments to intermediate saving and investment flows. Our challenge in the months ahead will be to install a regulatory regime that will ensure responsible risk management on the part of financial institutions, while encouraging them to continue taking the risks necessary and inherent in any successful market economy.

Mr. Greenspan, former chairman of the Federal Reserve, is president of Greenspan Associates LLC and author of “The Age of Turbulence: Adventures in a New World” (Penguin, 2007).

The arguments proposed by Mr. Greenspan are quite convincing, but it failed to consider another potential channel through which the short-term Fed funds rate could impact on the long term mortgage rate. Right after 2001 recession, investment was very weak and the only spotlight in the economy was the housing sector. The super easy monetary policy created a huge liquidity in the economy, and this was in addition to the external liquidity inflow from China and Japan. A large chunk of the money pool went to the housing sector. This helped drive down the long-term mortgage rate.