Another piece (source: wsj) on the worst timing to raise taxes during economic slump — New York is competing to become the tax capital of the world.

Like the old competition to have the world's tallest building, New York can't resist having the nation's highest taxes. So after California raised its top income tax rate to 10.55% last month, Albany's politicians leat into action to reclaim high-tax honors. Maybe C-Span can make this tax competition a new reality TV series; Carla Bruni, the first lady of France, could host. 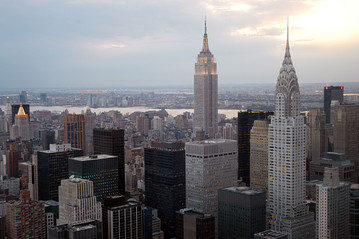 They can invite politicians from the at least 10 other states that are also considering major tax hikes, including Oregon, Illinois, Wisconsin, Washington, Arizona and New Jersey. One explicit argument for the $787 billion "stimulus" bill was to help states avoid these tax increases that even Keynesians understand are contractionary. Instead, the state politicians are pocketing the federal cash to maintain spending, and raising taxes anyway. Just another spend-and-tax bait and switch.

In New York, Assembly Speaker (and de facto Governor) Sheldon Silver and other Democrats will impose a two percentage point "millionaire tax" on New Yorkers who earn more than $200,000 a year ($300,000 for couples). This will lift the top state tax rate to 8.97% and the New York City rate to 12.62%. Since capital gains and dividends are taxed as ordinary income, New York will impose the nation's highest taxes on investment income — at a time when Wall Street is in jeopardy of losing its status as the world's financial capital.

But who and where are all these millionaires to pluck? More than any other state, New York has been hurt by the financial meltdown, and its $132 billion budget is now $17.7 billion in deficit. The days of high-roller Wall Street bonuses that finance 20% of the New York budget are long gone. The richest 1% of New Yorkers already pay almost 40% of the income tax, and the top 0.5% pay 30%.

Mr. Silver thinks he can squeeze more from these folks without any economic harm, arguing that recent income tax hikes didn't hurt New Jersey. (Yes, the pols in New York actually hold up New Jersey, whose economy and budget are also in shambles, as their role model.) The tax hike lobby in Albany points to a paper by Princeton researchers reporting that the number of "half-millionaires," those with incomes above $500,000, increased by 60% from 2003-2006 after New Jersey taxes rose (the top rate is now 8.98%). But this was a boom time for the national economy, especially in the financial industry where many New Jerseyites work, or at least used to work.

The better comparison is how New Jersey compared to the rest of the nation. According to the study's own data, over the same period the U.S. saw an increase of 76% in half-millionaire households. E.J. McMahon, a budget expert at the Manhattan Institute, calculates that New Jersey lost more than 4,000 high-income taxpayers after the tax increase.

Mr. Silver says of the coming tax hikes: "We've done it before. There hasn't been a catastrophe." Oh, really? According to Census Bureau data, over the past decade 1.97 million New Yorkers left the state for greener pastures — the biggest exodus of any state. New York City has lost more than 75,000 jobs since last August, and many industrial areas upstate are as rundown as Detroit. The American Legislative Exchange Council recently said New York had the worst economic outlook of all 50 states, including Michigan. And that analysis was done before these $4 billion in new taxes. How does Mr. Silver define "catastrophe"?

Oh, and it isn't just high earners who get smacked. The new budget raises another $2 billion or so on top of the $4 billion in income taxes with some 100 new taxes, fees, fines, surcharges and penalties to be paid by all New York residents. There are new charges for cell phone usage, fishing permits, health insurance (the "sick tax"), electric bills, and on bottled water, cigars, beer and wine. A New York Post analysis found that a typical family of four with an income below $100,000 would pay more than $800 a year in higher taxes and fees.

This is advertised as a plan of "shared sacrifice," but the group that is most responsible for New York's budget woes, the all-powerful public employee unions, somehow walk out of this with a 3% pay increase. The state is receiving an estimated $10 billion in federal stimulus money, and Democrats are spending every cent while raising the state budget by 9%. Then they insist with a straight face that taxes are the only way to close the budget deficit.

And so Albany is about to make a gigantic gamble on New York's economic future. The gamble is that the state with the highest cost of doing business can raise taxes on everyone who lives, works, breathes, eats or drinks in the state and not pay a heavy price for it. If they're wrong, New York will enhance its reputation as the Empire in Decline State.