By Paul Deng in Uncategorized on December 8, 2008.

Courtesy of Bob Hall at Stanford (Bob is on NBER recession dating committee):

The news on employment was worse than expected. The recession appears to be headed in the direction of the worst of the past 60 years. The graph shows the decline in employment from its peak in December 2007, with the previously worst recession superimposed on it, scaled up to make it comparable. This recession began in July 1981. Until recently, the decline of employment in this recession was rather less than in the 1981 experience, but the last two months actually declined faster than the decline in 1981. If the current decline bottoms out at the same point as the earlier one, it means that the remaining decline in jobs is about as large as the one that has already occurred–we are halfway to the worst point of the recession. 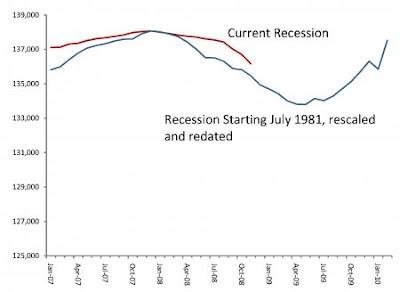