The volume of real-estate sales in the first quarter rose 8.2% from a year earlier to 113.09 million square meters, or about 135.71 million square yards, the National Bureau of Statistics said Monday. Residential property sales increased 8.7%, though the commercial market remained weak, with sales of office property down 13.1%. Property sales had declined sharply for most of 2008, but started to turn around at the beginning of this year.

Property prices remain down but are starting to stabilize. The statistics bureau said the average housing price in 70 Chinese cities rose 0.2% in March from February. That is the first gain after seven consecutive monthly declines, though the price index remains 1.3% below its level in March last year.

Analysts said the data contained signs of an early recovery in the property sector, key to revival of the world's third-largest economy. Beijing's 4 trillion yuan ($585 billion) stimulus plan relies mostly on government-led infrastructure investment, but it also is meant to mobilize private-sector investment in sectors such as real estate. 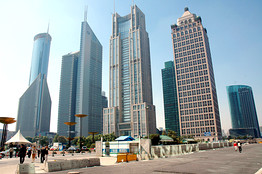 "The government measures to improve affordability have had a very big impact," said Michael Klibaner, head of China research at Jones Lang LaSalle, a real-estate-services company. "Between lower interest rates, lower transaction costs and lower down-payment requirements, affordability has improved enough that the number of people that can participate in the market has increased a lot. To us, that means that this recovery can last more than a month or two and will be more sustainable."

Beijing's measures to boost the real-estate sector, unveiled late last year, include giving broader tax breaks for home buyers as well as lowering down-payment requirements to 20% of the property value, from 30%.