Due to its unique population policies, China will face the aging problem quicker than most other developing countries. China’s National Bureau of Statistics (NBS) in 2004 shows that the proportion of the population aged 65 years and older was 8.58 percent (now is around 12%), passing the UN’s definition of ‘aging society’, where persons 65 years and over account for over 7 percent of the total population.

China’s fertility rate declined from 6 in 1957 to 2.3 in 1980 and then 1.7 since the 1990s. When China’s baby-boomer generation (born in 60-70s) retires, around 2030, China will face a severe problem of working labor shortage to support the elders. The current estimate is there may be only two working-age people for every senior citizen, compared with 13 to one now.

The graphs below show what the age structure of China looks like in 2005 and will be in 2050: 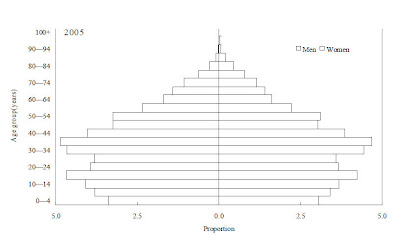 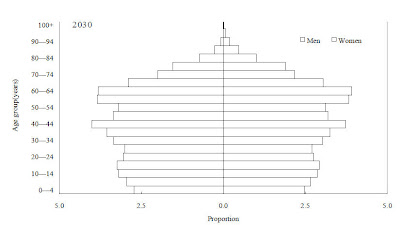 China needs to consider changing its one-child policy sooner rather than later. Other policies should also be implemented in parallel with the loosening of the current draconian one-child policy: build a sound social security and pension system so young workers won’t be burdened with supporting the whole family; gradually moving China from a labor-intensive economy to an innovation-led economy (i.e., more output per worker, but this will be much harder to achieve).