Home » Uncategorized » China’s Electric Car Market: The battle is on

China’s Electric Car Market: The battle is on

China has the strongest incentives to develop the cutting-edge electric cars. Why? Because China has the world’s largest population and the fastest growing economy; the rising middle class love the freedom of owning and driving a car; meanwhile, China is one of the most polluted countries in the world and the pressure to improve its environment is the greatest. How to find a middle ground that satisfies consumer demand while relieving the pollution pressure? The answer is electric cars.

China’s recent decision to adopt and subsidize electric cars will fundamentally change the auto industry in the world.

The investment of Chinese government in electric cars (the battery technology for example) will spur global competition in energy-saving technology. At the same time, the size of China’s domestic auto market also helps automakers to lower the cost of new technology really fast. One of the obstacles to develop electric cars in the US is automakers worry about the market for electric cars will be too small to make a profit. In other words, there is a lack of economy of scale. But with China in the game, automakers shall have no more worries. The US automakers have the option to sell the most-advanced electric cars to China. This in turn will force the US to rethink about its strategic position in global automobile industry. More policy changes in Washington will come naturally out of pressure from the other side of the Pacific.

Why can’t US government provide such incentives to automakers first? Because the oil-addicted Big-3 have their strong lobbying power in Washington. Thomas Friedman, the famed New York Times columnist, out of desperation, had once suggested the US had one day of dictatorship so government can force everybody to switch to cleaner technology. Well now, there is no need for that. China’s authoritarian government just did a favor to the US and to the world.

Competition is good: it works in economics and business; it also works in politics.

SHANGHAI — Chinese auto makers are unveiling a slew of battery-powered cars and other energy-efficient vehicles at this week’s auto show here that could make them more globally competitive and eventually help address the air pollution that chokes many Chinese cities.

Alternative-fuel cars were some of the hottest items on display at the Shanghai auto show from homegrown companies like Geely Automobile Holdings Ltd., Brilliance Jinbei Automobile Co. and Chery Automobile Co.

Some of the new and updated models, such as a battery-powered version of Geely’s Panda hatchback, may hit the market as early as October, and in some cases they might carry price tags low enough for farmers and other rural residents with limited financial means. 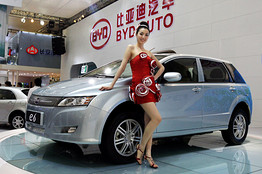 The aggressive plans illustrate China’s growing commitment to electrified vehicles and its strategy to support auto makers developing various types of electric cars and components with research subsidies. The government sees environmental upsides and a chance for its car makers to gain ground on foreign rivals, since electric vehicles are simpler to engineer than gasoline-engine ones.

Electric vehicles are “definitely affordable and environmentally friendly technology, and we think there’s a huge potential market in China for them,” Li Shufu, Geely’s chairman, said in an interview Monday.

Making electric vehicles affordable will be critical for them to have an impact on the environment, as vehicle ownership continues to rise quickly. The hundreds of thousands of new cars being added every year to roads in China could further damage already shaky air quality if they are oil-based vehicles.

The battery-powered cars that Chinese companies are showing are intended to be much less expensive than those planned by big foreign companies. Great Wall Motor Co., based in northern China’s Hebei province, on Monday unveiled its planned GWKulla all-electric car, which will likely be one of China’s cheapest battery-powered cars when it hits showrooms as early as next year. Its expected price tag is between 60,000 yuan and 70,000 yuan, or about $8,780 to $10,250. The GWKulla, a short, curvy compact, runs on lithium-ion batteries and can go 160 kilometers (99 miles) when fully charged, the company says.

Chery showed a tiny battery car, the Riichi M1, that boasts similar technology and performance, and is likely to be priced under 100,000 yuan. Geely’s Panda, which Geely executive Frank Zhao said the company plans to launch in China as early as October, will be similarly priced.

Those prices are much lower than that of General Motors Corp.’s Chevrolet Volt plug-in hybrid, which is expected to sell for $40,000 when it goes on sales in the U.S. in late 2010. GM plans to launch the Volt in China in 2011.

Chinese auto makers also showed other types of “new energy” vehicles, including regular gasoline-electric hybrids to compete with Toyota Motor Corp.’s Prius hybrid. Among the most notable: a gas-electric hybrid Shanghai Automotive Industry Corp. plans to launch by the end of next year.

China’s technologies for electric vehicles, especially batteries, are still lagging behind in some important ways. And while many of the cars being shown this week in Shanghai are touted as “cutting edge” by their producers, it remains unclear how well they will perform — and how Chinese consumers will react to such “new energy” cars.

In early testing, reviewers said a plug-in electric hybrid sedan from China’s BYD Co. launched late last year had some kinks. The car, called the F3DM, was launched at least a year ahead of a similar car planned by Toyota. But the gasoline engine in the BYD rattled and could be noisy when it kicked in, the reviewers said. The steering wheel also tends to get stiff when making turns because of the car’s increased weight from the batteries. BYD has said it is aware of these issues and is working resolve them.

“From what we have seen so far, [Chinese electric vehicle] technology is not that advanced” in terms of things like battery life, driving range and recharging, said Nick Reilly, head of GM Asia-Pacific operations, on Monday. “However, they have pretty good cost, and we know the Chinese government and these Chinese companies are investing a lot of money in battery technology, so I think it would be foolish of us to ignore them and believe that we are that far ahead.”

Some regulatory and market characteristics make China one of the most promising markets to experiment with electric cars. The government’s regulations and policies for things like building electric-car charging stations can be changed more easily here than in places like the U.S. Most Chinese buyers also are purchasing cars for the first time and have not developed particular preferences. 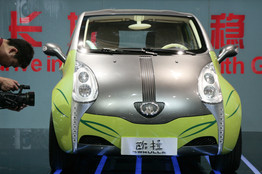 Still, “the challenge here is consumers are extremely value-oriented,” said Raymond Bierzynski, head of GM Asia-Pacific engineering operations. “They’re very much interested in the payback, so we have to be [make sure] value is there.” One key move GM is counting on to make the Volt more affordable in China is government incentives, whether they are cash incentives for customers or subsidies for fleet purchases by government agencies.

Another notable battery car, though its producer decided to skip the Shanghai show, is a super-low-cost, two-seat mini electric car that Chinese parts producer Wonder Auto Technology Inc. and Korean golf cart maker CT&T Co. are expected to begin producing jointly this summer. Though equipped with decidedly low-tech lead-acid batteries and having a top speed of only 60-to-65 kilometers an hour, the car can go 100 kilometers when fully charged, according to the two companies.

The car’s biggest appeal is its rock-bottom price of less than 40,000 yuan. Wonder Auto’s chairman and CEO, Qingjie Zhao, believes the Chinese-Korean joint venture in Jinzhou (Liaoning province) could boost sales of the car to 50,000 vehicles a year within three years.

“A plug-in hybrid selling for 150,000 yuan is a pipe dream for farmers. It would take five to 10 years before they become truly affordable for everyday folk,” Mr. Zhao said. “But low-cost commuter EVs like ours is already a reality, within the reach of thrifty farmers.”