Bamboo shoots, or green shoots, or whatever. The signs of recovery in China seem to be much more robust than in the US. In the US, what we have is a deceleration of decline; but in China, some key economic indicators actually had a big rebound. One of the common misconceptions about Chinese economy is the importance of trade. The argument goes since trade accounts for more than 40% of China’s GDP, a global economic slowdown led by the US will undoubtedly drag down China. There are certain truth in the argument and we did see China’s GDP growth had a dramatic fall, but the 40% share number is deceiving.

According to recent research (see my previous post), China’s trade sector, if measured by value added, only accounts for less 10% of GDP. The importance of trade is overly exaggerated. I quote Justin Lin, chief economist of the World Bank: What China is experiencing is a decline of absolute rate of growth (recoupling), but relatively speaking, China is going to grow much faster than all the advanced economies, including the US (decoupling).

According to another research done by Albert Kiedel at Carnegie Endowment, China’s GDP growth is almost independent of US GDP fluctuations (see the chart below), at least from 1988 to 2007. 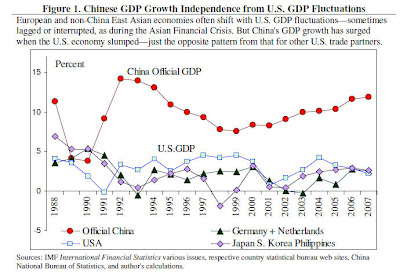 This Economist piece below has a more detailed analysis:

Signs that a giant fiscal stimulus is starting to work

THE Chinese consider eight to be a lucky number because it sounds like the word meaning “prosperity”. And luck, combined with a massive fiscal stimulus, may yet help the government to achieve its growth target of 8% in 2009. Earlier this year, most economists thought such growth was impossible at a time of deep global recession, but some are now nudging up their forecasts.

At first sight, the GDP figures published on April 16th were disappointing. China’s growth rate fell to 6.1% in the year to the first quarter, less than half its pace in mid-2007. On closer inspection, however, the economy is starting to perk up. Comparing the first quarter with the previous three months, GDP rose at an estimated annualised rate of around 6%, after nearly stalling in the fourth quarter (see chart). By March the economy was gaining more speed, with the year-on-year increase in industrial production rising to 8.3% from an average of 3.8% in the previous two months. Retail sales were 16% higher in real terms than a year ago, and fixed investment has soared by 30%, signalling that the government’s infrastructure-led stimulus is starting to work.

Exports, on the other hand, tumbled by 17% in the year to March and global demand is widely expected to remain weak this year. This is the main reason why some economists expect GDP growth of “only” 5% for 2009 as a whole. But the gloomier forecasts tend both to overstate the importance of exports and to understate the size of the government’s stimulus.

Contrary to conventional wisdom, China’s sharp economic slowdown was not triggered by a collapse in exports to America. Its growth began to slow in 2007, well before exports stumbled, driven by a collapse in the property market and construction. This was the result of tight credit policies aimed at preventing the economy from overheating. The global slump dealt a second blow late last year, but China is less dependent on exports than is commonly believed. Exports account for nearly 40% of GDP but they use a lot of imported components, and only make up about 18% of domestic value-added. Less than 10% of jobs are in the export sector.

If a collapse in domestic demand led China’s economy down, it can also help lead it up again. Not only is China’s fiscal stimulus one of the biggest in the world this year, but the government’s ability to “ask” state-owned firms to spend and state banks to lend means that the government’s measures are being implemented more rapidly than elsewhere. To take one example, railway investment has tripled over the past year.

Only about 30% of the government’s 4 trillion yuan ($585 billion) infrastructure package is being funded by the government. Most of the rest will be financed by bank lending, which had already soared by 30% in the 12 months to March, twice its pace last summer. JPMorgan thinks that this credit and investment boom could lift GDP growth to an annualised pace of over 10% in each of the next three quarters.

Jonathan Anderson, an economist at UBS, argues that the property market could be as important as the fiscal stimulus in determining China’s fate. After falling sharply last year, housing sales rose by 36% in value in the year to March. Housing starts are still down, but if sales continue to strengthen, construction could pick up in the second half of 2009. That would also help to support consumption: about half of China’s job losses among migrant workers have been in the building industry.

If construction does recover and infrastructure spending continues to rise, then even if exports remain weak, China could see growth of close to 8% this year—impressive stuff when rich economies are expected to contract by 4-5%. There are growing concerns about the quality of that growth, however. The World Bank estimates that government-influenced spending will account for three-quarters of China’s GDP growth this year. The clear risk is that politically directed lending creates more overcapacity, poor rates of return and future bad loans for banks.

These are valid concerns. But Andy Rothman, an economist at CLSA, a brokerage, reckons that state-owned firms mainly plan to increase their spending on upgrading existing production facilities, rather than expanding capacity. Also, about half of the increase in investment is on public infrastructure. This will inevitably include some white elephants but, in a poor country, the return on infrastructure investment is generally high. There is no need to build “bridges to nowhere” when two-fifths of villages lack a paved road to the nearest market town.

What about the risks to banks? The last time they were forced to support the government’s stimulus policy, during Asia’s financial crisis in 1998, Chinese banks were left with large non-performing loans. Bad loans will rise again this time, but Tao Wang, also at UBS, argues that banks are in a stronger position than in 1998. China is one of the few countries in the world where bank credit has fallen relative to GDP over the past five years. Banks have an average loan-to-deposit ratio of only 67%, low by international standards, and less than 5% of banks’ loans are non-performing, down from 40% in 1998.

The biggest task for China is to find a new engine for future growth. It cannot rely on exports, nor can the investment stimulus be sustained for long. Without stronger consumer spending, China’s growth will be much slower than in recent years. Reforms to improve health care and the social safety net will take many years to encourage people to save less.

Andy Xie, an independent economist based in Shanghai, suggests that the quickest way to boost consumption would be for the government to distribute the shares that it holds in state-owned enterprises to households, and to force those firms to pay larger dividends. But the authorities in Beijing are unlikely to take his advice. How else could they lean on big firms to support the economy in times like these?